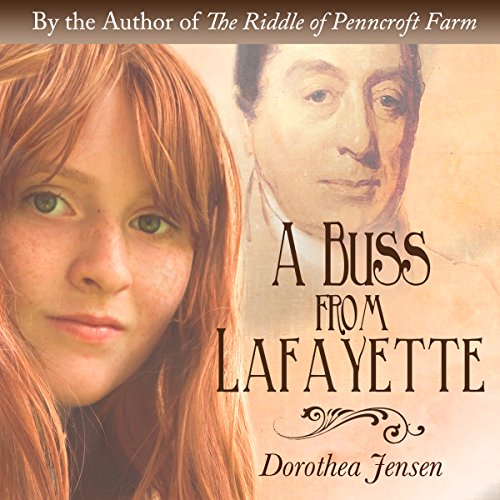 A Buss from Lafayette

Sometimes one little kiss can change everything, especially one from a world famous hero of the American Revolution!

Fourteen-year-old Clara Hargraves lives on a farm in Hopkinton, a small New Hampshire town, during the early 19th century. She has a couple of big problems. First of all, she has a stepmother Priscilla, who used to be her spinster schoolmistress aunt. Clara resents that her late mother's older sister has not only married her father but is about to have a baby. To make matters worse, "Prissy Priscilla" keeps trying to make the rambunctious, clever, and witty Clara act like a proper young lady. Secondly, Clara has red hair, making her a target for teasing by a handsome older boy, Dickon Weeks, and by her pretty 17-year-old "Dread Cousin Hetty". Clara, however, has a secret plan she hopes will change this.

During the last week of June, 1825, Clara's town is abuzz because the famous General Lafayette is about to visit their state during his farewell tour of America. In those eventful seven days, Clara learns a lot about her family, Hetty, Dickon, herself, and about Lafayette. She comes to understand the huge and vital role the young French aristocrat played in America's Revolutionary War and to see that her problems might not be quite so terrible after all.

What listeners say about A Buss from Lafayette

Historical Fiction at its best.

A great way to learn about the most important point in American History the Revolution and the War with England.

We can not ever forget the great men and women who contributed in so many ways in that period so that we can be free and
have a vigorous Democracy.The Writer did a good job in performing her own work.

The story is well crafted and the characters have great depth.

This story takes place in 1825, 50 years after the American Revolution. The Marquis de Lafayette (or Lafayette) traveled from France to volunteer and help the American colonists. He became a general and fought beside George Washington in the revolution. He was instrumental to the United States' winning the Revolutionary War. In 1825, there were celebrations in his honor throughout New England. This story is told through the eyes of a 14 year-old Clara from New Hampshire. She had lost her mother a year earlier and then her father married her mother's sister a week after her death. Clara's stepmother/Aunt is trying to transition Clara into a young lady by making her give up childish activities she loves. The history of Lafayette is told in bits and pieces through Clara's conversations and experiences. The author gives us a great deal of history and facts in her story, much of which I didn't know or didn't remember from school. This is a helpful source of information for the young person studying American History. I was gifted a copy of this audiobook in exchange for an honest review.