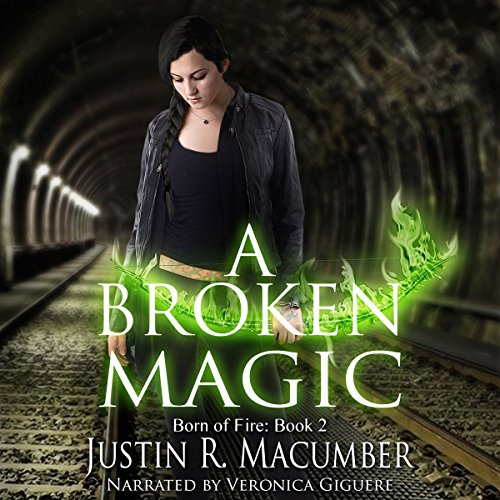 By: Justin R. Macumber
Narrated by: Veronica Giguere
Free with a 30-day trial

On a quest for domination, evil sorcerers from another land tore apart the barriers between our worlds, and the release of magical energy burned the Earth. Ten years later, a young woman named Skylar took control of the magic and used it to stop the sorcerers and seal the rift. Earth was saved.

Or, so it seemed.

Now, a new threat rises. Though the rift was closed, sorcerers from that distant land still live in our world, and the greatest of them, Embreal, has vowed to open a new rift. Helping him is Cassandra - a dark reflection of Skylar - who's devoted to him, heart and soul. Will Skylar's magic be enough to stop them? And, when she finally comes face to face with Cassandra, will she use her power against someone she so easily could have become?

What listeners say about A Broken Magic

Don't Judge this book by it's cover.

How this series isn't more popular is mind boggling. Great story, distinct characters, and beautiful writing. My hats off to the author.

My favorite character was Cassandra. She is the polar opposite to Skylar. I like how bad-ass she is.

Veronica does an amazing job of giving each character and the narration distinct voices. This makes the audio book experience much more enjoyable for me. I don't care for straight reads.

Not only magic can be broken.

A great addition to the Born of Fire series.

Where does A Broken Magic rank among all the audiobooks you’ve listened to so far?

I liked the story well enough. Individual issues arose with repetition and word choice, but not so badly they distracted me.

The narrator does some amazing voices, and her performance really helped the characters stand out as distinct from each other.

The book is ten hours long but felt a bit short. I think this may be because it feels like an installment of a larger arc; and not a complete story on its own. That said, I think it resolved the issues raised in the story well.

Better than the first!

I was a little underwhelmed with the first book of this series, A Minor Magic, when I first listened to it last year. I gave it 3 stars. I did go back and give it another listen before diving into A Broken Magic, and I liked it much better the second time around. I would definitely give it 4 stars now. With that grounding, I approached this book with a clear palate, avoiding prejudices I originally had against the first book.

It was better than the first. From the get-go. I see a lot of what I call "Second Book Stigma" where the second book of a series (especially trilogies) pales in comparison to the first. Macumber did a spectacular job with A Broken Magic, and I am ready for the next book in the series. There has to be one, after this ending!

Macumber branched out more with the characters in this book, giving us multiple point-of-view characters so we got to get into Cassandra's head as well as a few other characters besides Skylar. It was well done, and each POV character had his or her own distinct ways of seeing the world. Macumber's characterization has always been great (I've read a few of his other books, too), and he just keeps getting better. I look forward to seeing where things take Skylar and Nathan next!

Yes, I would recommend this to anyone who is not squeamish or feint of heart. The story is vivid, the characters are complex, and the world is compelling.

I liked Jack. He doesn't need magic to make his way through a world were the threat of death and magic are all around him.

Her voice is clear and lovely. She has wonderful inflection that adds to the drama of the story in just the right ways, without distracting from any of the story.

There were many moments through the book that made me anxious in all the right ways. It is a book that is well rounded in emotional strengths across the spectrum.

Loved the world and premiss. Dialogue was a little stilted and unnatural but not so much it ruined the story.

I received this audio book in exchange for an unbiased review.
SN