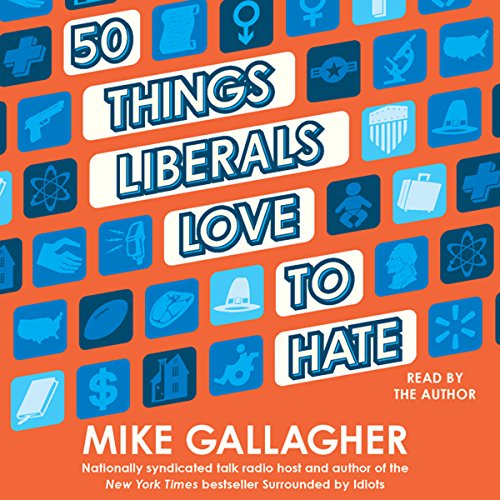 National radio talk show host Mike Gallagher provides a careful study into the psyche of the liberal mind, using humor and irony to both entertain and instruct.

A recent Gallup/USA Today Poll (not exactly Fox News Channel) revealed that 42 percent of Americans called themselves conservative, 35 percent moderate, while only 20 percent used the "L" word to describe themselves.

It doesn’t take much heavy lifting to understand the surface characteristics of liberals. They are exceedingly well educated, and rarely miss an opportunity to tell you so. They are exceedingly upper-middle class, which we know because it takes real money to support a twice-a-day double decaf habit at Starbucks, and yoga sessions for the wife and pets. They gather in clusters in urban environments where sushi joints outnumber children, and they dominate professions that leave a large cultural footprint, such as journalism, the arts, and the music industry.

But just who are these people who call themselves liberals? And how does such a small group have such a big impact on our culture? What motivates them? And what do they have against deodorant?

In 50 Things Liberals Love to Hate, radio talk show host and Fox News Channel contributor Mike Gallagher uses his trademark humor to take the listener inside the life and mind of the American liberal, coming up with 50 definitive things liberals just love to hate.

What listeners say about 50 Things Liberals Love to Hate

What did you love best about 50 Things Liberals Love to Hate?

My liberal friends even found a few things to laugh at.

I liked the chapter on babies :)

Have you listened to any of Mike Gallagher’s other performances before? How does this one compare?

Never listened to his books before.

It's a fun quick listen... Laugh at yourself... Maybe see things from another point of view. Very enjoyable

Mr. Gallagher is reading your mind

Where does 50 Things Liberals Love to Hate rank among all the audiobooks you’ve listened to so far?

One of the best. This covers so many subject and connects the dots in an intellectual and common sense pattern. Logical answers to life in the US today.

Humor. Most of the other books pointing out how much danger we are in make your blood boil and eyes bleed. This is an easy listen with a lot of humor. Now at least you can laugh while you cry.

Have you listened to any of Mike Gallagher’s other performances before? How does this one compare?

Yes. You always want to hear what the next thing liberals love to hate is.

Facebook will not sell ad space for this book! Ah, the New Speak Dictionary 2012 will not allow the book because of the word hate is not allowed however they use the word "hate" in their explanation. Having listened to the audio version of this book, my opinion is this is a must read or listen. Mike Gallagher actually puts into words all the things you think of but never thought of saying. Kind of like a conservative version of Seinfeld. Light and humorous, should be listened to or read by conservatives and liberals alike. If nothing is making sense to you, listen to George Orwell's 1984 and Animal Farm.

What made the experience of listening to 50 Things Liberals Love to Hate the most enjoyable?

The facts that Mike lays out are spot on. Mike made it an enlighing read while still keeping it fun.

What other book might you compare 50 Things Liberals Love to Hate to and why?

I enjoyed this book just like I did Bill O'Riley's book Killing Lincoln.

Mike cracked me up with his reading style. He made this book very worth the investment in.

Mike performing his version of a jihad yell cracked me up.