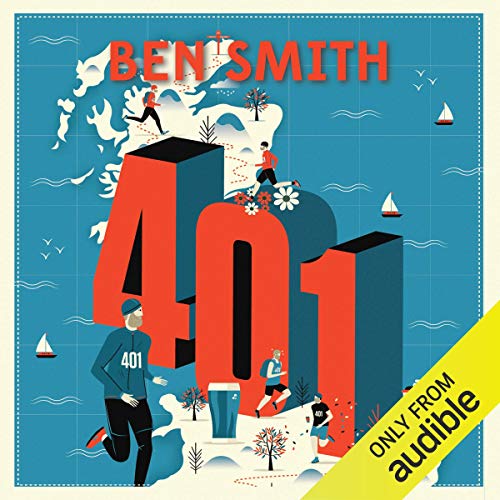 The inspiring story of Ben Smith – who ran 401 marathons in 401 days with minimal support, to raise money for Stonewall and Kidscape.

On 1 September 2015, Ben Smith set out from Bristol. Over the next 401 days, he would burn an estimated 2.4 million calories; run with almost 10,000 people; inspire almost 600 first-time marathon runners and visit 101 schools. He would also raise in excess of £325,000 for charity. In between, Ben fractured his back; was almost blown away by a hurricane on the Gower Peninsula; kissed his boyfriend Kyle live on TV during the London Marathon; took 10 days off after discovering his spine was collapsing; spent the next 117 days playing catchup. And he wouldn’t have changed a thing.

What listeners say about 401

I saw Ben speak at an event and was really inspired, I’ve recently taken up running and was curious to learn more about Ben’s journey and about how a normal person could transition from couch to ultra running. I think it’s an incredible achievement but the book for me was a tad disappointing. I started to get a little bored come the middle of all the guest chapters with the same message about what a great ‘normal’ compassionate guy Ben is, I don’t think that message needed as much repeated validation. The challenge speaks for itself and it felt a little self indulgent. I would liked to have heard more detail on the stories of those that ran with him and what he saw and heard on each run, the blisters, the struggles. Overall though not wanting to take away from what is a remarkable achievement. Ben is still a top guy in my eyes but the book would’ve benefited from some editing.!

Great story and very inspiring but, can't please everyone and maybe I'm being a bit critical. The love story part and very deep feelings was not for me.

A great story, Ben is inspirational

Really enjoyed this, What a fantastic listen, everyone needs a Ben Smith in their life

Absolutely loved it. Wish Ben had taken in Ireland on his wonderful and amazing journey.

A raw account of a unique person doing a remarkable thing.

A really good in site to a remarkable yet normal guy who found running his savour.

If I was being picky I would say a little more information and detail regarding things like the kit he used and why and also the things he maybe tried but wouldn’t recommend. Basically more about the actual running side of things and possibly a little less on his personal relationship. No offence taken.

Great challenge, not that great a book

Any criticism I have for this book is not for author and for what he did. For sure that is a fantastic challenge, done for the right reasons and hugely impressive.

As a book however, I don't think this is well written and put together. It is very repetitive and altogether a bit dull. I also don't think the 'motivational' side of the book is especially well thought out or practical. Other than 'don't be afraid to be yourself' and 'I'm just a normal guy which means anyone can do amazing things' there isn't a whole lot of learning you can take from this book. It is essentially this just message drummed over and over and over, so if you're looking for some insight to help you grow I don't personally think this is the best book for you.

The sections where others were asked to write something about Ben/the challenge are the most repetitive of all. There is only so many times I can listen to someone say 'Ben is a great guy, he's really down to earth and lights up a room as soon as you meet him'. That seems to be the only message a lot of the sections written by other people get across.

In my opinion the book talks about these amazing stories people keep sharing with him, but there are so few actually explored. Why not trim some of the 'Ben is great' quotes and include a few more peoples stories about how the challenge impacted them instead? Or maybe talk a little bit more about the running itself, describe the scenery more, talk about the gear you used, what was the most useful things, the least useful etc..

All in all, not a good listen, which is a shame as the story is fantastic.

It is a very interesting and inspiring story. The narration is perfect and the audio is top notch. The book, however, could've been a little bit shorter. The last hour or so felt like a repetition of what already had been said...

Ben’s story is an inspirational one. Going from the pit of despair, struggling with demons of bullying and hiding who he really was to being a role model for what determination, honesty and being a decent chap can achieve. Whether or not you’re into running, this is a great story.
The only criticism I have is in the translation of the text into an audiobook, in that when there are passages written by others it would be good to know at the start of those passages who wrote them, rather than at the end.

I would recommend this book to anyone, especially if you've had any issues and barriers in your life. Ben comes across as a very normal person who had a difficult start in life, as many of us do, who went out and achieved something amazing and changed his life for the better forever. It has given me the feeling that you can do what you want to make you happy no matter how hard it is, it will be worth it in the end. Thank you Ben for writing down your story.

Even if your not into running, everyone should listen to Ben's story. A brilliant book.