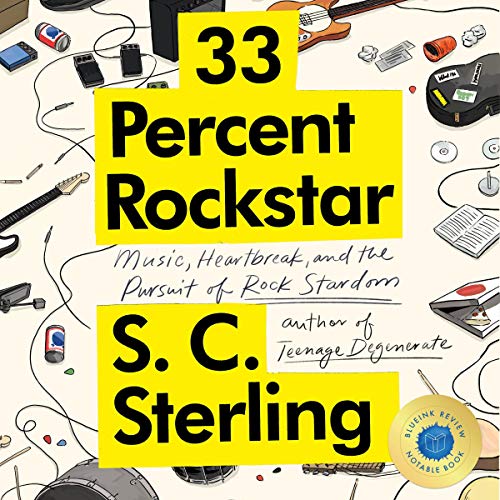 Scott has played over 500 concerts at hundreds of venues spanning almost two decades. From performing to the bar staff at strip mall dive bars, to a sold-out show with members of The Misfits and the Ramones, 33 Percent Rockstar: Music, Heartbreak and the Pursuit of Rock Stardom is about the love of music and life as a struggling musician. It is the true story of what happens when you give up everything to follow your dreams - even when they lead to a run-down strip club in a seedy part of Lincoln, Nebraska.

Scott learned how to play the bass guitar and became a musician. He'd eventually become a damn good one. He fell in love and got his heart broken, twice. He played in multiple bands, recorded multiple albums, and toured the country.

In the end, Scott never made it big, but it wasn’t for lack of trying. All for the love of music, he toiled in dead-end jobs, drove across the country in dilapidated tour vans, and dealt with the fragile egos and creative differences of a rotating cast of bands and band members.

33 Percent Rockstar: Music, Heartbreak and the Pursuit of Rock Stardom is the sad tale which lies behind the vast majority of musicians who never achieve rock stardom and offers a glimpse of the everyday lives of those hopeful, possibly deluded, souls pursuing the rock star dream.

"Starred Review! 33 Percent Rockstar is an entertaining, honest look at the trials and tribulations most musicians endure - and still fail to attain their dreams. Yet it also illustrates why the dream remains alive." (BlueInk Reviews)

"10 out of 10! Scott has a life story that is truly one of a kind. His experiences, successes, and failures while playing with multiple bands and band members are relayed in a manner that is honest, amusing, and often poignant. His personal imperfections and emotional tumult, along with the often gritty backdrop of the music world, allow for this story to be both relatable and compelling." (The Booklife Prize)

"Sterling (Teenage Degenerate, 2016) recounts his misadventures while struggling to attain rock 'n' roll stardom. The book details a blur of concerts and van trips, all soaked in beer, as life on the road brought the young musicians only privation and sleeplessness. Sterling has a natural, easygoing prose style that suits his tale of the difficulties of making it in the music world or when analyzing his own failures, which he reveals with disarming frankness. One message, though, emerges from these recollections - that the author's love of music never wavered. An earnest elegy to the band life." (Kirkus Reviews)

What listeners say about 33 Percent Rockstar

Fly on the wall of another lifestyle

Half expecting a book of wishful thinking peppered with trite tall tales I've got to admit that I was hooked with an early revelation about the use of a first guitar, which I imagine many will relate to and struck me as distinctly and refreshingly honest, and gave me a chuckle. Accepting that we each only have one life, I sometimes enjoy putting myself in other people's shoes and trying to understand and relate to how they've lived their lives, experiencing things that I never will and making decisions I'd never get to make. This story didn't feel like a polished piece of PR spin, and that's a great quality, it felt like an invite to be fly-on-the-wall of a person who followed their passion and desire. It might have not have led to super stardom and mega riches, as the vast majority don't I suppose, but it did create a wealth of experiences which are well told in a raw and believable style. Great insight into another life/style.

Live music isn't all about the big boys..

A good representation of what it's like to be in a band in the lower reaches.
It's more about hours of boredom followed by 30 minutes of total terror.