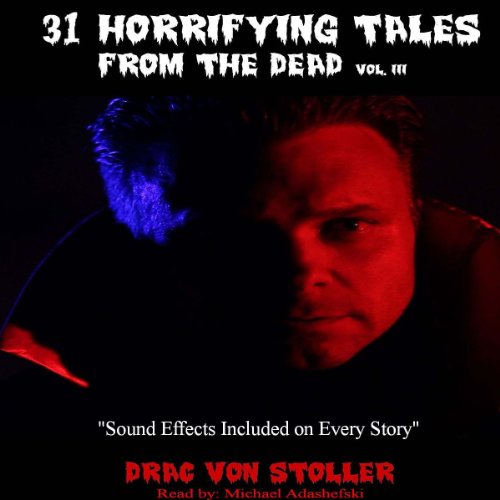 The final collection in Drac Von Stoller's 31 Horrifying Tales from the Dead series. Tales include: "Ashes to Ashes", "Bloody Mary", "Buried Alive", "Death Island Lighthouse", "Don't Go in the Woods", "Don't Mess with the Dead", "Horror Island Amusement Park", "Infected", "It Came from Hell", "Killer Bedtime Stories", "Knock! Knock!", "Murder Mansion", "Nightmare Inn", "Pray for Daylight", "Scared of the Dark", "The Body Farm", "The Boogeyman", "The Clown", "The Dare", "The Entity from Hell", "The Ghost of Hill Haven Road", "The Haunted Cave", "The Headless Horsemen", "The Legend of Haunted Hills Cemetery", "The Mirror of Lost Souls", "The Night Halloween Took Over the World", "The Urban Legend Killings", "There's Something Dead in this House", "Thump! Thump! Drag!", "Torture Chamber", and "The Woman with the Velvet Ribbon Around Her Neck".

All 31 stories are narrated by Michael Adashefski, whose voice and sound effects will take you to the edge of your seat. Sit back and turn the lights off and get ready for the scare of your life!