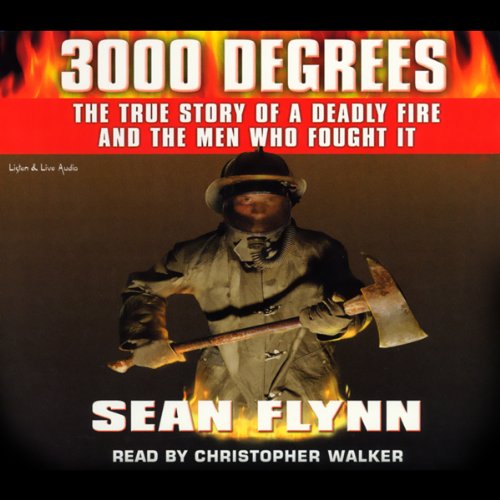 By: Sean Flynn
Narrated by: Christopher Walker
Try for $0.00

On December 3, 1999, the call crackled in to the men of the Worchester, Massachusetts, Fire Department: a three-alarm warehouse blaze in a six-story windowless colossus of brick and mortar.

Firefighters love the excitement of a "triple". But this was a different beast. Rollovers, flash-overs, back drafts - this one had it all. Once inside, they found themselves trapped in a snarling furnace of blazing orange heat as hot as a crematorium, with smoke so black and predatory they had to feel for their partners next to them. Swallowed deep in the building, with no way out, they struggled to survive an ill-fated ordeal that would push them to the very limits of loyalty and courage.

What happened next, and how their lives and community were changed forever, offers an unprecedented look at these heroic men whose job it is to rush into burning buildings when everyone else just wants out.

"[Among] books appearing this year about fires and firefighting...the best of the lot is Sean Flynn's 3000 Degrees." (Newsweek)
"Gripping prose...With confident, deft description, Flynn brings to life this 3000-degree catastrophe with a crackling intensity." (Publishers Weekly)
"Christopher Walker captures that tragic day with a dramatic ending that focuses on the emotions of the people involved - the firefighters and their families waiting for word at home. He gives human perspective to this multifaceted view of one of the worst tragedies in firefighting history." (AudioFile)

What listeners say about 3000 Degrees

It is, not, about the fire. It is, at best, a documentary about how the death of six firefighters affected their relatives. I would be more interested if they spent less time on 'character development' more about the fire. Either way, I don't see any potential for this book to became a "4 or 5-star listening experience' for me. Since it was a documentary, more of a description of the building before the fire would have been nice. Instead we get 'rooms.' The "documentary" is incomplete because the book failed to say what the outcome was for the arsonists.

Would you ever listen to anything by Sean Flynn again?

The narration was fine.

I get this book expecting it to be about firefighting and experiences. Not about the survivors. Not that the survivors don't have a story, they do, but that's not what this book was described as being about. I was particularly interested in this fire.

The writing was sloppy. It's probably not accurate to say that everyone who made calls to the survivor's families said, "There's a really big fire." Poor research or lack of knowledge: crampons are on your feet, you don't hang from them. There is no relation between firefighting and rock climbing. It isn't even analogous.