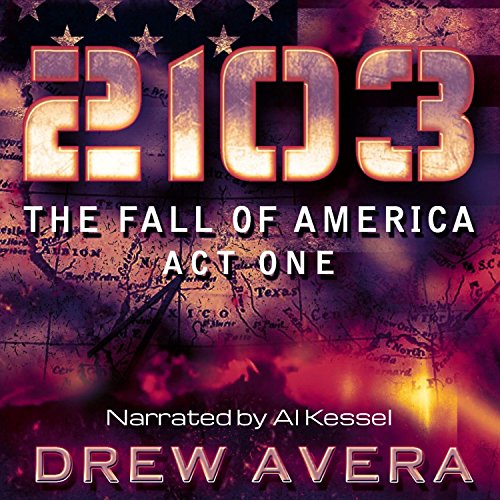 It's the year 2103. Fifty-three years after the second American Civil War, the landscape of a once great nation is in shambles. The United States is no more and is now broken into three separate countries; The American Union, The Confederate States of America, and the California Republic. The American Union is in a constant state of Martial Law due to rioting by a group of protestors known as "Outliers". They fight against the oppressive laws decreed by President Caleb Fulton, but all is not what it seems. The man they know as President Fulton is an actor named Stephen O'Neil who is being held captive by an administration that has been in power for more than 20 years.

After their plan to have the protestors killed in a tragedy dubbed "The Chicago Massacre", the American Union's capital is in upheaval and reeling over the deaths as more troops hit the ground to secure order. But the massacre is nothing more than a giant act of smoke and mirrors. There is an agenda at play that once it has begun, will have a devastating effect on the entire world.

Told from multiple points of view, in brief glimpses of a character's life, 2103 is a story about corruption, greed, and the human will to survive. For those who love dystopian, speculative fiction. Take a journey into the "land of the free and the home of the brave" after everything falls apart.

2103 Reminded Me Why I Do Not Listen To This Genre

The description sounded like a really cool book, the United States broken up into three separate countries and the struggles and triumphs that are caused because of it.

However, now I remember why I don't choose to read/listen to sci-fi books. I was lost the entire time. It sounded a bit like The Walking Dead (which I have not seen any episodes of)

If SyFy is your thing, please don't allow this review to dissuade you from purchasing with a credit for paying for a download. I will point out that it is very short, less than three hours.

The narrator was very good and had the topic, subject matter been different I think I would be more enthused about it. He did a great job depicting the mostly male cast very well.

No: I can't think of anything to warn about

Credit worthy/$: *I was given a copy of this book in exchange for a review.*

Thank you for reading my review. If you found it helpful please click yes, below this text.

From the first well crafted (and well voiced) word I was a captive of the narrative. No background filling, do other tasks while half listening for me. I was transfixed and transported to every location and could quite literally see through the character`s eyes. If part two is half what part one was I will be overjoyed to receive it!

Big Brother wants you to read this book.....

Interesting that in this dark book are the seeds of what some may see in the government today. Its a good read and the charactors are very real. The book takes you from the first sentence and dosent let go until the end of the book.... but it isnt really the End. Looking forward to the next act.

Like it dark and enjoying being terrified.... this could be your book. But some Issues relating to God and leadership may bother some. This book is very well read and easy to listen to. And interesting world.... But I shouldnt care to live in it.

he did a god job

Amazing Story of a Dystopian America

Interesting story told from multiple points of views that keeps you glued to the story with a diverse cast of characters as told by the narrator, who literally brings it all to life. Very scary take on a futuristic world, and kept my interest right to the end.

I hope there is a sequel

What made the experience of listening to 2103 - Act 1 the most enjoyable?

I liked the several points of view from the characters. In large, they all think they are doing the right thing, and showing this made the story very interesting.

There's plenty to explore with this world in future stories.

Have you listened to any of Al Kessel’s other performances before? How does this one compare?

No, this was my first.

The scenes from the priest's point of view were particularly intense.

As you can probably guess, the year is 2103 and it has been just over 50 years since the second American Civil War. However, this civil war left the USA in 3 separate pieces. This book, Act I, takes place in one of those three – the American Union. Martial law is the usual law with anyone who shares an opinion that is contrary to the government’s is labeled an Outlier. Death usually follows shortly after the label is affixed.

With plenty of suspense and no little amount of action, Avera leads us through this future America in grisly fashion. There’s sorrow, death, selfishness, madness, greed for power, and no little amount of anger. President Caleb Fulton rules everyone and everything with an iron fist, including his actor persona, a man names Stephen he hired to play himself for the public eye. Being wheelchair bound and suffering from a disfiguring illness, he knew the American people would never have elected him president; hence the subterfuge. Stephen and his family live under constant threat from the real Fulton and his shadow administration.

Throughout the book, we see many different viewpoints. As with Reich, everyone is a hero in their own head and this is an aspect I really enjoyed about the book. Some justify their actions more than others. Some simply assume they are a good person, hence all their actions must be the right actions. A few of the characters I thoroughly enjoyed hating on (the real Fulton and this other psycho who I won’t name so as to avoid spoilers) while other characters I could completely sympathize with even though I disagreed with some of their actions (such as the priest). It made for dynamic reading.

My one criticism concerns the female characters. They are love interests, wives, or sex objects. None of them stand alone as an individual character. Rather they are something the men must take care of, rescue, or use in some way. Needless to say, I found their characters to be the least interesting of the story.

This tale has an underlying cautionary note, as did Reich, concerning power unchecked and allowed to blossom (inevitably?) into a brutal tyranny draped in bureaucracy that punishes all but those at the pinnacle of power. Plenty of questions were left open ended for the reader to ponder, and also for a sequel. I hope there is a sequel. After all, not all the bad guys met their deserved end.

Narration: Over all, the narration was good. each character had a distinct voice, the female voices were believable, and the pacing was good. There was one psycho bad guy whose voice I thought was a little over the top, and little too sinister and creepy, so we always knew he was up to no good, but this quickly became apparent and then this creepy voice matched the character’s actions.

Total futurism. I liked this novella. Well written, kept me hooked throughout the book. I enjoyed the storyline and the main character

I really like this. It was different. Imagine the concept of another civil war in the future then breaking off into the three separate entities. This was an interesting listen and I hope to hear more from Drew Avera. Al Kessel did a phenomenal job with all the characters in this story. Impressive. My favorite was PM Leonard. They were all great.
I received this audiobook foc in exchange for an unbiased review.

More like a dark political satire! I enjoyed this with its twist of surprise. Very dark, very good.
It could also be a conspiracy theorist wet dream! Uniquely done. Its a novella and a cliff hanger. I definitely want more!!! I wish this would of been a novel with all the details. It would be a great novel!
The narration was good. The bad guy sounded as creepy as he was in the story! He gave me the chills. The other characters were distinguishable from one another and their voices fit their personalities.
Good listen! Glad I had the opportunity! This is my review via a promotional copy.

This is a story set about 100 years into the future after the second American Civil War. The United States is divided into three different countries: The American Union, The Confederate States of America, and the California Republic. The story focuses on living in the American Union, where martial law would be considered taking a cake walk. The premise was interesting, but the amount of death and killing for anyone essentially looking cross-eyed at the policies of the day, was too much for me. Plus I would have liked a bit more character development. I also didn't like how the story just ended. An extra paragraph or two at the end would have helped bring closure to this particular story, even if a trilogy is ultimately expected.

Al Kissel's narration was good. He had different and distinguishable voices for each character. He also denoted urgency and resignation when appropriate.