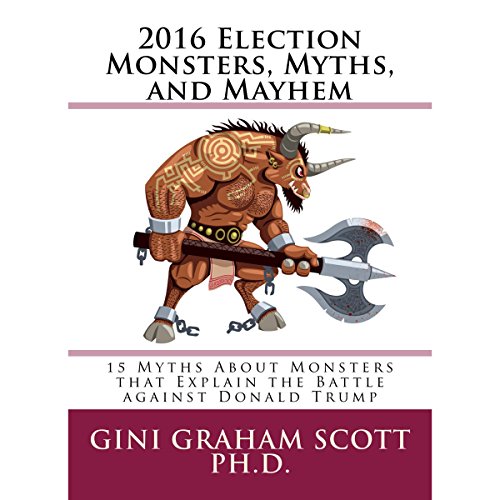 2016 Election Monster Myths was inspired by watching the growing battle against Donald Trump by the media, Republican establishment, Democrats, academics, minority groups, and many others. He has a disapproval rating of about two-thirds of the country. Yet he had continued to outpoll other candidates in this crazy election by appealing to the angry and disaffected, though he was once considered just a reality show entertainer and successful businessman.

This growing battle led me to think of the way these myths about monsters in many cultures can help explain what is going on. As such, I have compared Trump to 15 of these monsters, including the dragon St. George fights, the Chimera, Medusa, the Cyclops, the Kraken, Charybis, the Hydra, the Minotaur, the Sphinx, and even the Devil, in his many guises, including Beelzebub, Lucifer, and Satan.

These myths reflect the battle against Trump and his message of racism, xenophobia, and hate:

What listeners say about 2016 Election Monsters, Myths, and Mayhem

This is a must have for all special snowflakes. the soothing voice of the narrator will warm your troubled heart while huddled in your safe space.