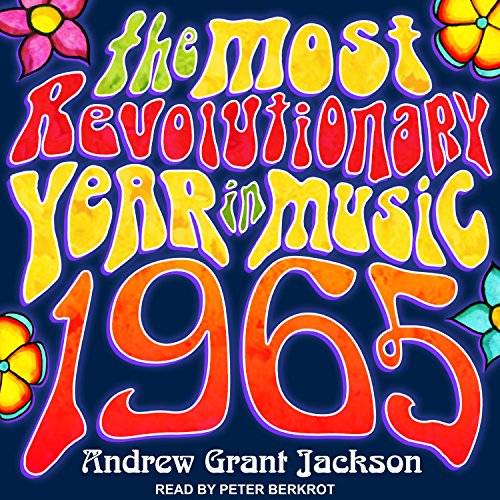 By: Andrew Grant Jackson
Narrated by: Peter Berkrot
Try for $0.00

During 12 unforgettable months in the middle of the turbulent '60s, America saw the rise of innovative new sounds that would change popular music as we knew it. In 1965: The Most Revolutionary Year in Music, music historian Andrew Grant Jackson (Still the Greatest: The Essential Songs of The Beatles' Solo Careers) chronicles a groundbreaking year of creativity fueled by rivalries between musicians and continents, sweeping social changes, and technological breakthroughs.

Jackson weaves fascinating and often surprising stories into a panoramic narrative of the seismic cultural shifts wrought by the Civil Rights Movement, feminism, Youthquake, the miniskirt, the Pill, psychedelics, and Vietnam. 1965 is a fascinating account of a defining year that produced some of the greatest songs, albums, and artists of all time.

What listeners say about 1965

Competent storytelling until the epilogue, in which he tells us what it all means. Then there is a surprising turn for the worse. He asserts that a nation that takes LSD is embracing freedom, which is good, but a nation taking anti-depressants is anesthetizing itself and no longer hip and healthy. And he says that the Christian dissidents who first settled the country did so to enable non-Christians to thrive, not a thought that was on their minds. Best to skip the epilogue (the editor must have wandered off) and decide for yourself what it all means, then begin a new book.

interesting for rock and roll fans

fair amount of politics but I understand that politics were important in mid 60s rock music. lots of interesting information there's nothing particularly groundbreaking.

Loads of juicy nuggets of information, but over done in that every concept seems over thought. Too many references to Mr. tambourine Man and its influence on everything! Creativity seems diminished as a result.