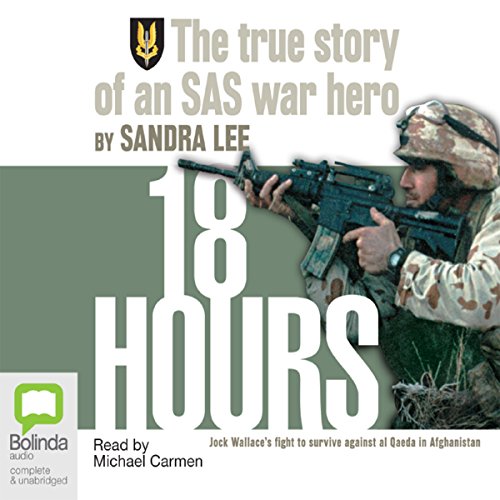 In the inspiring tradition of Black Hawk Down, this is the riveting real-life story of how an Australian SAS signalman's courage under fire saved more than 80 lives. It is an enthralling eyewitness account of the war on terror.

Jock Wallace was pumped. It was the start of Operation Anaconda, the U.S.-led military offensive to flush out al Qaeda and the Taliban from their last stronghold in the Shahi Kot Valley in Afghanistan. Minutes after the combat-ready troops stormed down the back ramps of the Chinook helicopters, Jock's company was under fire. Eighteen hours of hell was just beginning. But there was no way Jock was going down without a fight. Nor were the men he was with. Holding off the enemy, rescuing the injured, reporting to base, calling in air support - Jock gave it all that he had. He was determined not to die on foreign soil, not at the hands of al Qaeda.

This is a great story and very well researched and written. The Aussie narrator does a great job of doing the voices and American accents. He is the most Aussie sounding bloke they could have chosen which ads to the pride I feel as an Australian when listening to it. This would be great for some US listeners who may forget that there are many other nationalities supporting the war effort in Afghanistan and doing a great job. I don't remember ever reading/listening to a "war"book written by a female author and she is bloody good at it. Please write another one!

Pretty good story, although I must disagree with the American accent deal - the narrator's attempts were terrible. It didn't detract from the story, though, which I enjoyed despite thinking there might have been a bit more to it when I downloaded it. I was expecting there to be more action rather than a detailed account of what it's like to be bombarded almost constantly by the enemy. This doesn't take anything away from the fact that all the soldiers involved deserve any recognition they received as it takes a special person to maintain composure under such circumstances. The main characters in the book are the sort of people you would want on your side should you be in a fight and their story is quite inspirational and well worth listening to.

Everything in Duncan's review sums up my experience having just listened to this book.

I'm sure this is an incredible story, but I couldn't find it. I just got lost and never got found. I'll try it again one of these days.

I thought it was anexcellent book, along the lines of Forest Gump, you don't plan on things happening, sometimes they just happpen and it's your life.

It is amazing to think that in this day and age it is still possible for men to get caught in the real guts of war. While the book is written almost blandly, the reader has to put themselves into the position and realize that the situation was anything but calm! Amazing tale.