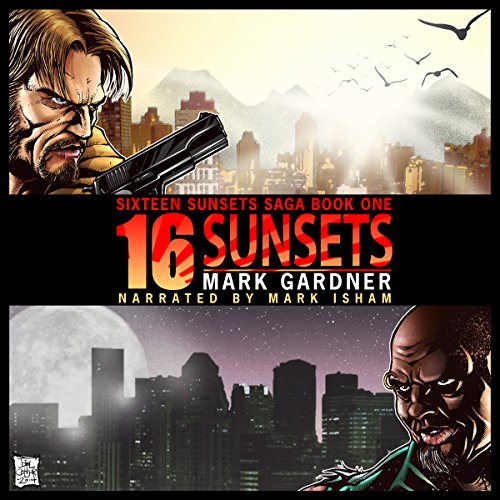 By: Mark Gardner
Narrated by: Mark Isham
Try for $0.00

At one time, all humans had superpowers. Gene mutation hid the powers. Kristof and Joaquin know the powers are real - but is the world ready for them?

What listeners say about 16 Sunsets

A different kind of superhero story

I would probably recommend this to a friend looking for something a little different. It's on the short side, and initially I wasn't sure about the superhero storyline, because I'm not really into superheros, but I ended up really enjoying it, caring about the characters, and rooting for them. Now I'm waiting for the sequel!

What was one of the most memorable moments of 16 Sunsets?

Oh definitely my favorite part was when Joaquin learned he had superpowers and decided to be a hero, and everything he tried kept coming out wrong. It was both darkly comedic and a little heartbreaking.

Have you listened to any of Mark Isham’s other performances before? How does this one compare?

I have not listened to any of Mark Isham's other performances, so I have nothing to compare this with. I'm more of a podcast girl; I haven't listened to a lot of audio books.

I thought overall the performance was good, and I enjoyed the animation he brought to the reading. He captured the comic book feel of a superhero story, but without going over the top. I wouldn't avoid him in the future. (Though I do think Mark's voice is a bit too masculine for him to really pull off doing voices for female characters. His reading of Anne, especially, seemed a little campy.)

It did make me laugh. (The part above.)

There were a lot of things I liked about the story: the complexity of the characters, for one. Unlike a lot of superhero stories where the morality can be very black and white and who the heroes and villains are is clear cut, in 16 Sunsets, nobody is quite who you expect them to be.

I do wish it had been a little longer. I felt like the first third of the story, Kristof's first "16 Sunsets", when both he and Joaquin are first learning about their powers, is rushed. I would have liked to spend more time with them as they were struggling in that period of change and discovery.

(I received a review copy of this audiobook from the publisher.)