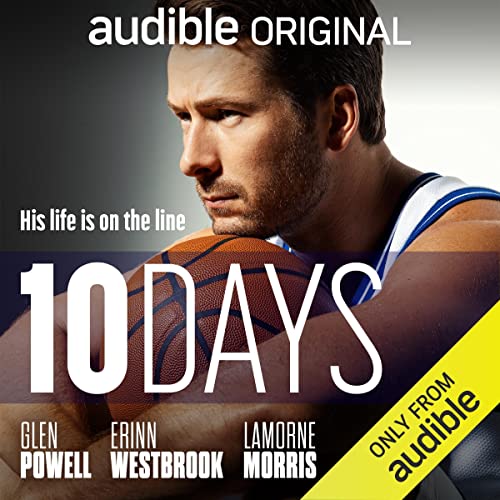 Aaron Tracy is a writer and producer, whose credits include Law & Order: SVU. He’s the creator of Sequestered, a serialized thriller that ran two seasons, and also has sold original shows to CBS, USA, Freeform, MGM, Lionsgate TV, Universal TV, and has recently been commissioned to write a limited series by Anonymous Content and an espionage thriller by Alcon Entertainment. In audio, Aaron’s most recent scripted drama is the hit Audible Original, The Coldest Case, starring Aaron Paul, Krysten Ritter, and Alexis Bledel. He’s the creator, writer, and director of several more upcoming audio shows, with producing partners including Shonda Rhimes, Eva Longoria, and James Patterson. Aaron is on faculty at Yale.
Glen Powell
Erinn Westbrook
Lamorne Morris

Glen can next be seen starring alongside Tom Cruise and Miles Teller in Top Gun: Maverick, directed by Joe Kosinski. Currently, he is filming alongside Jonathan Majors in JD Dillard’s Devotion. He also stars in Richard Linklater’s animated film Apollo 10 1/2: A Space Age Adventure. He previously starred in Set It Up and Everybody Wants Some!! His other film credits include The Guernsey Literary and Potato Peel Pie Society, Sand Castle, and Hidden Figures. In television, Glen starred in Ryan Murphy’s Scream Queens and recently lent his vocal talents to Jurassic World: Camp Cretaceous, which has been renewed for a second season.

Erinn Westbrook began her professional acting career after graduating from Harvard University with an AB in English, American Literature and Language and a secondary field in Dramatic Arts. She is best known for her roles on Netflix’s Insatiable and FOX’s Glee. She has appeared on FOX’s The Resident, CBS’ NCIS, and the CW’s Jane the Virgin and Supernatural, among others. Erinn is currently starring as "Tabitha Tate" in the CW’s hit show Riverdale.

Lamorne Morris was tapped as the lead of the hybrid live-action/animated Hulu series Woke, inspired by the life and art of cartoonist Keith Knight. Morris most recently appeared in the Netflix comedy film Desperados alongside Anna Camp, Robbie Amell, Nasim Padrad and Heather Graham which debuted July 2020. He was last seen on the big screen in Sony’s Bloodshot, opposite Vin Diesel in February 2020. Additionally, Morris was seen in National Geographic’s limited series Valley of Boom, opposite Bradley Whitford and Steve Zahn.
He is best known for playing fan-favorite ‘Winston’ on Fox’s popular comedy New Girl for seven seasons where he stars opposite Zoey Deschanel, Max Greenfield, and Jake Johnson. His additional past projects include Warner Bros. film Game Night with Jason Bateman and Rachel McAdams, Netflix film Sandy Wexler where he starred opposite Adam Sandler, and the hilarious Barbershop 3; The Next Cut starring opposite Ice Cube.
ORIGINALS

Getting caught up in a mystery or tangled family drama; laughing with, rooting for, or crying over people who don’t exist…
ARTICLE

What listeners say about 10 Days

Didn't expect to love it but I did!!

Exciting, suspenseful, didn't know a sports story could hit home with me so much. Loved especially Jessica Hecht as the mom. And the actress who played the ex-girlfriend. Great twist and startling reversal at end! Wow! Want to know what's going to happen to these characters next! For a non sports fan just a perfect experience.

loved it so much

Engaging and emotional. My daughter recommended I listen to this and I’m so glad I did. I don’t know a lot about basketball but it didn’t matter. The love story is so powerful. All the performances are great.

This show is so well written, utterly engaging and an absolute delight to listen too!

So good! Not just for basketball fans. Glen Powell is amazing. Was on edge of my seat!

Thoroughly enjoyed it. Very entertaining and kept me listening. The performances were solid! Fun and exiting storyline. I knew nothing about the G League prior to this series.

Powell makes the personal journey of Danny feel real and raw. Fantastic. I can feel the pressure he is under! It's great.

These performances are great

Love this style of storytelling, very entertaining and great to listen to during commutes. Would love to see more content like this from audible.

Wow, One of the best audiodramas i've ever listen!

Highly recommended, the production, the dialogs , the performance and sound effect!
What a great story, and I must sat Glen Powell made an amazing job to let us feel the pressure ,stress and all the emotions with this kind of situation.
I hope we're going to see a movie / tv series adaption - can't wait!

- Helped me to overcome HIGH PRESSURE CHALLENGE in life.. because that's what the story is about.
- It taught me good conversational English ;
- great background voices, makes the story like a real movie.

A decent audio drama. If you like sports (Basketball) in particular it helps but not essential.

Great For Any Basketball Fan

Great story and great acting.
Almost feels like you are in the same room as the characters.
Reconmend for any Basketball fan

Great. Easy to listen to.

Had me engaged the whole time. Great voices, overall sound quality and efffects. Finished in only a few days.

Excellent story, and performances. I wish audible would get rid of the 15 word review minimum.