You might know someone who needed help having a child. A friend or coworker who needed help growing their family, and turned to a doctor or clinic in search of that special kind of intimate relationship you can get only with a child. You may even have personal experience with the medicine of miracles that fills empty cribs and screens cruel disease. But I’m guessing you don’t know much about how this billion-dollar market came to be.

Assisted reproduction was born in the US a few days after I was, in December 1981, with a baby named Elizabeth Carr. She was typical in every way—except for a basic fact of her existence. Carr was the first American baby conceived in a laboratory. Her arrival set off a panic. Leaders declared: "That is not how we were meant to come into the world." "It’s playing God." "Science has gone too far."

Suddenly everything was up for grabs—not just when life begins, but how. The idea unsettled a lot of people, and put lawmakers in a bind. The government could ban IVF; but now that it worked, how could they deny it to desperate couples? Another option was to regulate. But many feared that would legitimize something they found troubling. That left a third option: Do nothing, and let the private sector sort it out. Which is exactly what happened.

He was sold as "the perfect donor." But it was all a lie.

When fertility treatment goes well, everyone’s overjoyed. But when nobody’s looking, things can take a different turn. As a law professor with a focus on reproductive ethics, I’ve studied loads of embryo mix-ups and freezer meltdowns. I even wrote a book about them. But there was one case I couldn’t let go of. Because it goes to the heart of this whole enterprise. And it forced me to rethink my own past—in ways I think all of us have wondered where we come from and how that shapes the people we become.

This case started with one man, Donor 9623. For more than a decade, he provided samples to one of the world’s biggest sperm banks. They kept selling out. His profile described a 6'4" neuroscience PhD student who had Einstein’s IQ and looked like Tom Cruise. The guy was an internationally acclaimed drummer who played six sports and spoke five languages. He was sold as "the perfect donor." But it was all a lie. And the truth posed grave risks for untold numbers of his biological children.

I discovered it was far more than just any single man or company. Behind this story was a whole industry with loose oversight and few safeguards. There are no limits on how many kids come from any one guy, for example. Ancestry websites reveal popular donors like 9623 can have scores of kids, sometimes hundreds. Sperm banks aren’t required to run background checks or test for hereditary disorders, either. They don’t even have to share medical updates—however reliable or urgent—with the families.

Sperm banks keep names secret, so parents can’t vet donors on their own. College-age men like 9623 are promised “an easy, anonymous way to make serious money.” Like other details about themselves, health risks are mostly self-reported and taken on faith. Whatever a donor holds back stays hidden unless his identity gets leaked. That’s how the case of Donor 9623 wound up in court.

The parents who chose Donor 9623 feel betrayed by the professionals they’d trusted to help them make a family... But how can they complain about the very distortions or failures that led them to pick the genes they did?

I came in thinking it was about how tough it is to predict how these kids’ lives might unfold: What will they grow up like? Will they be okay? Is it more about nature or nurture? But the real issues go much deeper, back to the birth of Elizabeth Carr, and the unresolved discomfort about the pull of genetic ties, and what’s reasonable to expect when you try to have a child.

The parents who chose Donor 9623 feel betrayed by the professionals they’d trusted to help them make a family. Now they live with the fear and anxiety of a potentially scary future. But how can they complain about the very distortions or failures that led them to pick the genes they did? Without it, they would have ended up with an entirely different kid, or none at all. There’s no cosmic orphanage. The child they have just wouldn’t exist.

That’s why the case was dismissed by every court that had decided it before the Audible Original Donor 9623 published. They said letting the parents sue would send an intolerable message: "People like this are too defective to exist." Maybe worse: "I wish my own child hadn’t been born." But if the value of life and capacity for love know no bounds, where does that leave us? Does this business of making human beings just get a free pass?

A month after Donor 9623 came out, the highest court in Georgia reached a new compromise. The justices still refused to "recognize claims for damages that depend on [the idea that any] life [i]s an injury." But they also explained "those principles do not create blanket immunity for reproductive service providers." For example, parents could argue they were deprived of critical health information that kept them from getting their kids effective treatment for "pain and other symptoms suffered" that "could have been avoided or mitigated had the[y] known the truth."

What’s okay to want in a child, when you’re in a position to choose?

The Georgia Supreme Court’s most striking conclusion comes almost as a throwaway at the very end of its 27-page opinion. It says that misrepresenting donor information can leave companies liable for "deceptive trade practices" that "essentially amount to ordinary consumer fraud." That may not sound surprising at all. It’s just sperm—advertised like crazy—and sold for a pretty penny.

But admitting that donor selection is shopping—and treating parents as consumers—gets at the biggest controversy in this whole story: What’s okay to want in a child, when you’re in a position to choose? Just 10 fingers and toes? Good looks and fancy degrees? What about height or perfect pitch? When does it cross the line from just wanting the best for your future kid to designing a baby to satisfy your tastes?

This is what drew me to the case of Donor 9623. But if I’m honest, I initially spent more time thinking about laws than people. To work through these questions with the care they deserve, I needed help from donors and doctors, CEOs and scientists, parents and children. These conversations uncovered surprising layers of stigma and shame, resilience and redemption. Breaking them down into bite-sized episodes brought out shades of gray I never realized were there. And it gave voice to the people whose lives are transformed by this larger drift from chance to choice, from misfortune to misconduct. Donor 9623 doesn’t just try to make sense of these complex experiences and understandings. Telling this story has changed my life too. 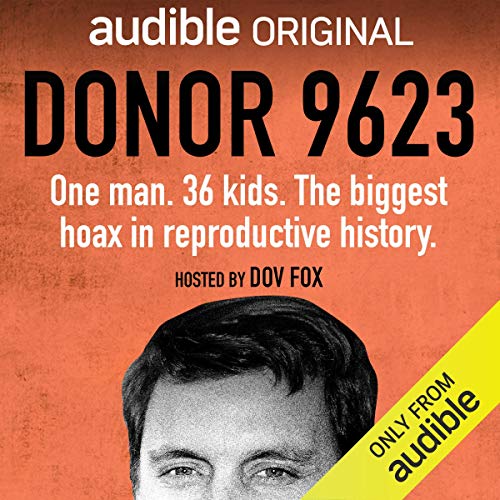