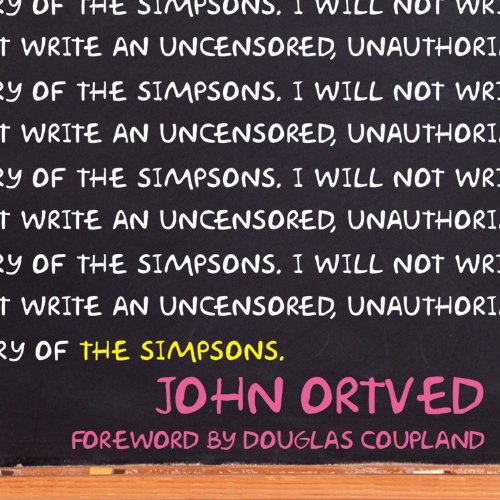 The Simpsons is one of the most successful shows in the history of television. From its first moment on air, the series' rich characters, subversive themes, and layered humor have resounded deeply with audiences, both young and old, who wanted more from their entertainment than what was being meted out at the time by the likes of Full House, Growing Pains, and Family Matters.

Spawned as an animated short on The Tracy Ullman Show - mere filler on the way to commercial breaks - the series grew from a controversial cult favorite to a mainstream powerhouse, and after 19 years, the residents of Springfield no longer simply hold up a mirror to our way of life; they have ingrained themselves into it.

John Ortved's oral history is the first-ever look behind the scenes at the creation and day-to-day running of The Simpsons, as told by many of the people who make it, including writers, animators, producers, and network executives. It's an intriguing yet hilarious tale, full of betrayal, ambition, and love. Like the family it depicts, the show's creative forces have been riven by dysfunction from the get-go - outsize egos clashing with studio executives and one another over credit for and control of a pop-culture institution.

Contrary to popular belief, The Simpsons did not spring from one man's brain, fully formed, like a hilarious Athena. Its inception was a process, with many parents, and this book tells the story.

"You have to admire all the work that went into this unauthorized history. It's the labor of a disenchanted fan, but a smart, loving fan nonetheless." ( Entertainment Weekly)
"As tasty as a pink-glazed donut with sprinkles, as refreshing as a Duff beer and as piquant as a curry slushy from Kwik-E Mart." ( The Washington Post)

What listeners say about The Simpsons

I stopped listening at the 30 minute mark because the reader is so monotone and monotonous I couldn't take it anymore. Be sure to listen to the sound sample several times in a row to see if you can handle it.

That said, the content is great. I just couldn't get past the narration.

A treat for Simpsons' fans

First and foremost this is a thoroughly researched, well written, very detailed account of the how The Simpsons came to be on TV. Beyond that Ortveld clearly has a deep seated belief that:

Of course it's the "why" that makes the book enjoyable to listen to. The author's own ruminations on what makes the show so important to pop culture borders on religious fervor at times. In between those thoughts we get detailed accounts of all the back stabbings, broken promises, out of control egos, strikes, walk-outs, epic temper tantrums and sheer creative nutiness that happened behind the scenes. Honestly, some of it was really quite fascinating. Just to hear Conan O'Brian recount jumping around the writer's room like a "trained monkey" shouting "Jub, jub, jub, jub!" was worth the cost alone.
In the end it'd be hard to see how this book would appeal to anyone beyond the show's fans. But if you are a fan, lapsed or otherwise, jump in. I think you'll like it.

Stopped listening just short of the half hour mark

Once again, a narrator who presents the book's content like a 1950's film strip. No emotion, barely any inflection or change in tone, and little to no understanding of what he was presenting. And Unlistenable to me, and I had high hopes for this one.

Oral History of The Simpsons

I really like these types of “oral history / behind-the-scenes” books and found this one interesting.

The trouble is: there is no cast to interview so at times it just felt like the biography of the creators as opposed to a more dishy book about The Show.

great insight into the series that defined much of the 90s. most of the story is taken from public sources/interviews and well compiled to reflect how the Simpsons became the phenomena that it did

Would you consider the audio edition of The Simpsons to be better than the print version?

Read, don't listen, to this book. Many books are enhanced by listening to it, this one is not. The narrator sounds bored as he reads the material and pronounces names incorrectly. He repeatedly pronounces Cartman as "Cart-man" and even calls Millhouse, MOllhouse.

The author inserts his opinion far too much. Quite honestly, I don't think I necessarily disagreed with him, but I when listening to a book about the ins and outs of a show/industry, I don't need to hear their personal opinion. This caused the book to lose credibility to me. Now I can only wonder what things were cherry-picked or taken out of context to support his opinions.

Seedy under belly of the Simpsons.

I was expecting such a hilarious subject matter to be so glib. It's interesting enough to find that the life of a sitcom writer is hell on earth but so much of the industry being mean and cruel was quite the bummer. When it does get into the jokes of the show it often repeats itself. Yes yes we all know George Bush Hates the Simpsons. Further more the narrator mis pronounces several names. I'd say fanatics only but fanatics all ready know this stuff.

The book was an oral history and the insights were interesting however the narrator pronounced names and catchphrases as if he had never heard them before. For a book about how the Simpsons catchphrases have become part of our vernacular and the characters iconic in global culture it was jarring to have the narrator mispronounce character names and use wrong inflections.

I found everything about it fascinating. Sure I disagree with the whole anything after season 9 is bad mentality

But my biggest issue is with the narrator from mispronounceing names to just sounding disinterested. If I wasn't already super into the simpsons I wouldn't have listened to it all the way through

What did you love best about The Simpsons?

The author did a great job of selecting quotes and linking them together to form his narrative.

Would you be willing to try another one of John Allen Nelson and Justine Eyre ’s performances?

Absolutely not. Justine was fine, but Mr. Nelson really needs to find another line of work. He's a fine actor on screen, but he seems like a different person here. I just went through my wish list to make sure that I did not have any other selections narrated by Mr. Allen.

How did they find the one American who has never seen The Simpsons and has little clue about pop culture to narrate this book? Who doesn't know how to pronounce "D'oh," Homer Simpsons exclamation that's so famous it made the dictionary? He mispronounced South Park's Cartman as CartMAN, like he was a superhero. U2's Bono sounded like Sonny Bono's last name. On top of that, his cadence was very off-putting and the whole performance was dry. Sorry, Mr. Nelson. This just ain't your bag.