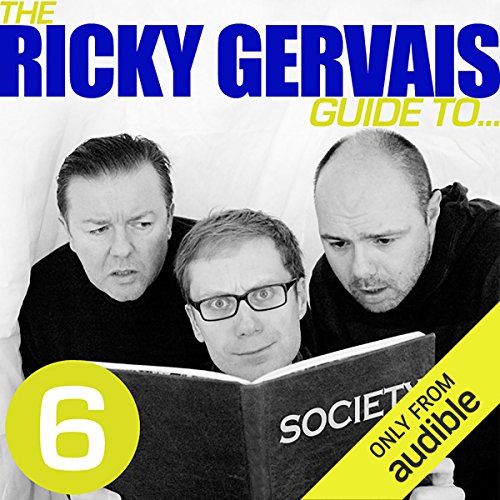 The sixth in a new series of definitive dissertations dealing with the feats of humankind.

Join Ricky Gervais, Steve Merchant and Karl Pilkington as they probe the nature of human society.

What listeners say about The Ricky Gervais Guide to...SOCIETY

I listened to this in the car, and laughed so loud I nearly had to pull off the road. The same thing happened when I listened to it going for a walk, and I must have looked strange bursting into laughter on the sidewalk alone. One complaint is that Karl's accent is so thick I sometimes don't get the punch lines (I am American, a British person wouldn't have a problem). And I sympathize with Karl, whereas Ricky comes off as a bully sometimes. All around it's excellent listening, and it spurred me to listen to others in the series.

As always, and forever hilarious, Rickys Guide To's are a must buy. Do it now!

Not what I expected

I have always liked Ricky Gervais but this one did nothing for me. The only person laughing was him.

I'd recommend ANYTHING these guys do.

What they say is whimsical, hilarious and often quite informative.

I find them really easy to listen to and also relistening is still entertaining.