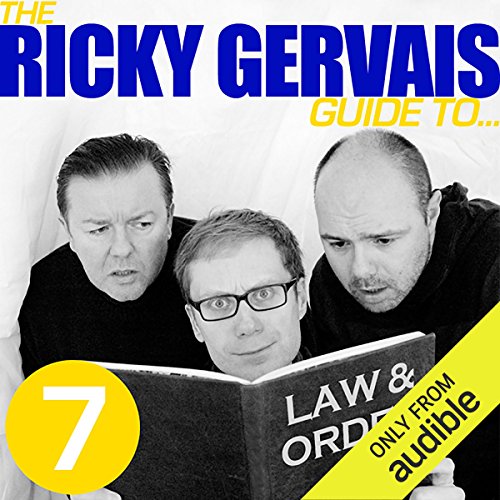 The seventh in a new series of all-encompassing excursions.

Join Ricky Gervais, Steve Merchant, and Karl Pilkington as they ruminate on all aspects of law and order. Justice and morality get a look in, with criminality galore. Ricky tells tales of gold bullion, London villains and an L.A. cop. Steve discloses a past transgression, and Karl has a stab at hostage negotiation.

What listeners say about The Ricky Gervais Guide to...LAW AND ORDER

I live in the states and I've been listening to the gervais clan pretty religiously for about 4ish years now. I constantly check up on new things coming out because I cannot get enough of these guys. They are smart and funny and make up a dynamic team that as far as I know about-nothing else compares. There is a definite evolution in their relationship with each other since the old radio days but these audio books never disappoint. If you crave the old stuff go to youtube. Every single radio show is on there in parts.

Karl is right about lots of the things in here,Ricky Gervais and Steven seem to gang up on him,but over all they’re a great trio!!!

Fabulous and well worth listening to if you wish to be amused intelligently.

If you made a film of this book, what would be the tag line be?

Well worth listening to anything these guys do.

It's just a dammed shame they don't still produce more episodes, belly laughter for all.