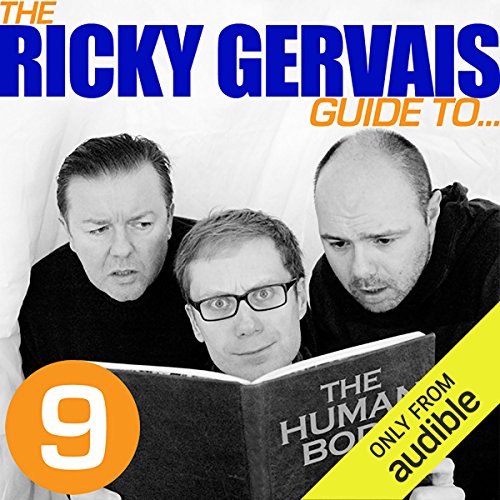 The Ricky Gervais Guide to... THE HUMAN BODY

The ninth episode in this new series considers the human body, its form, function, and failings.

Join Ricky Gervais and Steve Merchant and Karl Pilkington on a biological adventure of human proportions.

What listeners say about The Ricky Gervais Guide to... THE HUMAN BODY

I am never disappointed by the sheer drivel that these 3 come up with, and while the other episodes are also wonderful I think this one is by far my favorite. The depth of Carl's lack of understanding of basic concepts is staggering. By the time you add in Ricky and Steve's observations it is comedy gold♡♡♡

I love these guys and almost everything they do (except the new show, weirdly). But this had me laughing out loud on my commute so much I looked forward to getting on the train that evening to finish it.

These people talking over each other with added crazy-ass laughing just is annoying. I found nothing of the comedic venue I was hoping for.

One if the best in the series.

Better than most of the last five in the series. Can Carl possibly be that thick?

Not for public transport

...unless you want to look like a madman for laughing suddenly aloud to yourself uncontrollably.
(This is true for all in this series.)

The best! Laughed so hard I peed myself

Love all the " Ricky Guides to..." this one especially. Listened while at work at almost got fired for laughing so hard. Would have been worth losing job over. Fucking hell as Ricky would say.