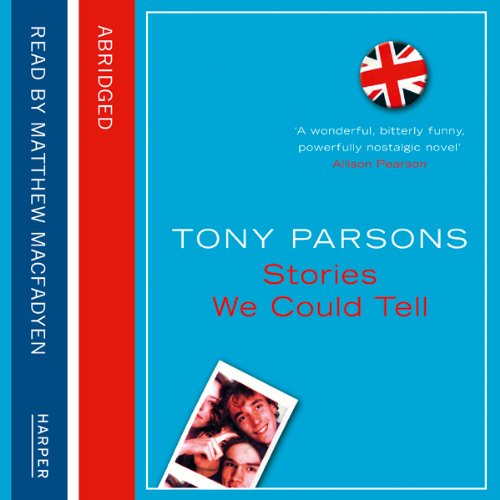 Stories We Could Tell

By: Tony Parsons
Narrated by: Matthew Macfadyen
Try for $0.00

Sometimes you can grow up in just one night. It is 16 August 1977, the day that Elvis dies, and Terry is back from Berlin, basking in the light of his friendship with legendary rock star Dag Wood. But when Dag arrives in London he sets his sights on a mysterious young photographer called Misty, the girl that Terry loves. Will the love of Terry's life survive this hot summer's night?

Ray is the only writer on the inky music weekly "The Paper" who refuses to cut his hair and stop wearing flares. On the eve of being sacked, Ray finds comfort in the arms of an older woman called Mrs Brown. But John Lennon is in town for just one night and Ray believes that if he can interview the reclusive Beatle, he can save his job. Can John Lennon and the love of an older woman really save a young man's soul?

Leon is on the run from a gang called the Dagenham Dogs who have taken exception to one of his bitchy reviews. Hiding out in a disco called The Goldmine, Leon meets Ruby, the dancing queen of his dreams. But will true love or the Dagenham Dogs find Leon before the night is over?

Stories We Could Tell is a book about growing up and being young, about sex and love and rock and roll, about the dreams of youth colliding head-on with the grown-up world. Tony Parsons goes back to his roots for this deeply personal book, the story he has been waiting to tell.

What listeners say about Stories We Could Tell

This novel is based on the author's time working for the New Musical Express in London in the mid-to-late seventies. This weekly music paper was full of great writers and at the forefront of punk/new wave revolution.

As someone who grew up with the 'NME' as my 'bible', I really looked forward to this listen. However, whilst it does capture the music scene of the time, the characters and story don't really come to life and Parsons would have been better off writting a non-fiction account of his time at the paper.

This was Luke watching paint dry .. stuck with it ... glad when it was finally
finished