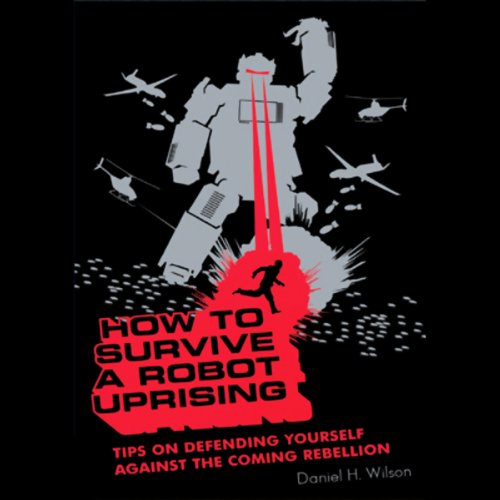 Try for $0.00
Try our newest plan – unlimited listening to select audiobooks, Audible Originals, and podcasts.
You will get an email reminder before your trial ends.
$7.95 a month after 30 day trial. Upgrade or cancel anytime.

How to Survive a Robot Uprising

By: Daniel H. Wilson
Narrated by: Stefan Rudnicki
Try for $0.00

How do you spot a robot mimicking a human? How do you recognize and deactivate a rebel servant robot? How do you escape a murderous "smart" house, or evade a swarm of marauding robotic flies?

Based on extensive interviews with prominent scientists and including a thorough overview of cutting edge robot prototypes like humanoid walkers, insect, gecko, and snake robots, this one-of-a-kind audiobook makes a witty yet legitimate introduction to contemporary robotics.

What listeners say about How to Survive a Robot Uprising

How To Survive A Robot Uprising is a humorous and informative look at current and theoretical future capabilities of robotics.

This audio book is worth it's price just for the fascinating look at technology and the progress being made. But it goes further than that, and wraps it all up in a unique format, musing on how robotic capabilities and weaknesses will influence how we must fight them if the day ever comes when they rebel on us.

The narrator for this audio book also reads very well, and his deep voice really adds to the books documentary-like feeling.


On Why We Should Be Concerned:
"In Japan, fuzzy little real robots are delivering much appreciated hug therapy to the elderly. Children are frolicking with smiling robot toys. It all seems so innocuous. And yet, how could so many Hollywood scripts be wrong?"


On Thwarting A Robotic House:
"Stay focused, your house may play misleading sounds and voices, manipulate environmental conditions such as lighting and temperature, and even try to reason with you using evil robot logic."


On Identifying Robots Disguised As Humans:
"Listen to the subject's voice. Make sure that intonation and emotion in the voice are consistent with the situation. Set off an emotional response in the subject with compliments, jokes, or insults. Bolt immediately if you hear an impassive Austrian accent."


"Try to evoke an emotion. Does the speaker mind when you intimately discuss the promiscuity of his mother? If not, you may be dealing with a very polite human, or a non-human. Either way it's a good idea to hang up the phone."


On Emotions (how's this for logic?):
"Never show fear. Robots have no emotions. Sensing your fear could make a robot jealous, and send it into an angry rage."


It's a highly entertaining listen that is not only amusing, but actually deals with a lot of real science.

Great Listen...Just Drags On A Little

The research that has obviously gone into making this book is amazing. The author thoroughly goes into pretty much EVERY situation one might come across or look out for during your inevitable battle between man & machine.
I'd compair this book to "The Zombie Survival Guide" in the way he goes into so much depth and seriousness regarding the somewhat tongue-in-cheek subject material of the text. LOTS of great audio clips/quotes regarding robots.
My ONLY complaint of this book would be concerning the fact that it comes across as somewhat dry during some points strictly due to the fact that the author goes over EVERY little detail with a fine toothed comb. This might be a plus to some, (especially in the paper edition) but I just happened to find some parts pretty dull.

I picked this one up because Stefan Rudnicki is one of my favorite narrators (go get "The Humanoids" and the unabridged verions of "Ender's Game" right now!) and because the obviously non-serious title made the book seem like something I would really enjoy.

Unfortunately this book is much more "informative" than it is "humorous". There's certainly nothing wrong with learning about robots and preparing for when they "inevitably" go berserk, but for a novel that classifies itself as "humor" (it even mentions that you likely found it in the humor section of your bookstore), it isn't really all that funny. There are a few sections where I laughed, but for the most part this book is a relatively straight-forward presentation of recent developments in the field of robotics. Perhaps I was expecting too much, because robots are by their very nature not funny.

If you want a crash course in robotics advances and a bit of humor with it, this is a fun listen. Not only does this cover the humorous "what if" scenarios of robots one day trying to rise against humans, but it covers many of the capabilities that robots currently have (sensors, mobility, communication) in the world today.

I got this one as kind of a guilty pleasure (surrendering to my geekier side) and found myself learning a lot as well as laughing. Those that enjoy sci fi movies will find lots of references to pop culture movies (Star Wars, Terminator, I Robot). I found it particularly amusing to hear these movies referred to more as historical documents rather than "way out there" movies.

The narration can be a bit monotone, but it kind of goes with the dark overtones of the humor in the book.

If you take things in life really seriously, you probably will find this annoying and purile. If you are willing to give into your inner geek and inner child, I think you are in for a few enjoyable hours of audio.

the future is not for the timid

A very curious and entertaining way to introduce some "way cool" technological advances with an educated guess at the techno future-scape... or a nut job's look to the future with some less than practical advice on dealing with the requisite paranoid delusions that accompany overthinking. In summary, a great book. I laughed out loud and learned some too.

This is a none-to-subtle rip off of The Zombie Survival Guide by Max Brooks, which I cannot recommend highly enough (see also World War Z).

That being said, it's well-read, well-written, and successfully sneaks interesting information about robotics to the listener.

You have to be a bit of a techie (e.g. nerd) to appreciate this book. The humor is well-placed throughout the book and the narrator makes it even better. I bought the audiobook for a long flight and it was a GREAT listen. Although, I'm sure the person next to me had to wonder why I was snickering every so often...

Dan Wilson gives us a mixture actual scientific reality like the latest information on Kismet from Carnegie Mellon University in Pittsburgh, PA and the fictional works of Asimov, William Gibson, and Warren Ellis. The book deals with the subject matter with in-world realism, dual-world practicality, and respect.

The narration is sustained, with uncommonly appropriate intonation, even if the performance is characterless and less-than-desireable.

This book could be a sister book to Max Brooks' Zombie Survival Guides and comes highly recommended.

Excellent information about the potential and limitations of robotics, told with dry humor. We thought the narrator's tone fit the material well - even a humorous book about an apocalypse deserves a dark delivery.
I hadn't really thought about robotics much before listening to this, and it gave me an excellent overview of the field. The author clearly knows his material, and he knows how to present it so a novice can understand it and learn.

This book is fantastic. It's funny, engaging, and fairly factually based. The author does a good job of incorporating recent advances in robotics into a fun and entertaining book about how to beat back the robot hoardes. I recommed this short book for a good laugh.

not funny or interesting

What disappointed you about How to Survive a Robot Uprising?

i expected humor or smart writing , found neither which was a shame as i enjoyed other books from the author... this one was short but still felt undeserving of my time...

Has How to Survive a Robot Uprising put you off other books in this genre?

What reaction did this book spark in you? Anger, sadness, disappointment?

Enjoyable introduction to the topic

Humorous and interesting introduction to the sweeping range of robotic capabilities.Given the wide-ranging material, , I suspect there may not be sufficient detail forr people who are already knowledgeable of the area, but for the rest of us it's good fun. I would have loved more detail in the last chapter on the future robot uprising ... though really I guess I should go take a survival course now!