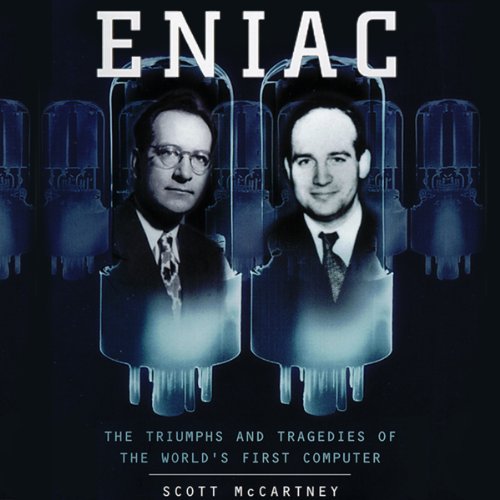 Try for $0.00
Try our newest plan – unlimited listening to select audiobooks, Audible Originals, and podcasts.
You will get an email reminder before your trial ends.
$7.95 a month after 30 day trial. Upgrade or cancel anytime.

By: Scott McCartney
Narrated by: Adams Morgan
Try for $0.00

For all his genius, John von Neumann was not, as he is generally credited, the true father of the modern computer. That honor belongs to the two men - John Mauchly and Presper Eckert - who built the world's first programmable computer, the legendary ENIAC (Electronic Numerical Integrator and Computer). Mauchly and Eckert, who met in 1941, developed a revolutionary vision: to make electricity "think." Funded by the U.S. Army, the team they led constructed a behemoth - weighing 30 tons with 18,000 vacuum tubes and miles of wiring - that blazed a trail to the next generation of computers that quickly followed, and in the process ignited a controversy over ownership that exists to this day. After their groundbreaking achievement, Mauchly and Eckert were shadowed by personal tragedies and professional setbacks as their accomplishment was laid claim to by others. They formed the world's first computer company, the Eckert-Mauchly Computer Corporation, but were quickly outdistanced by IBM.

Based on original interviews with surviving participants and the first study of Mauchly and Eckert's personal papers, ENIAC is a dramatic human story and a vital contribution to the history of technology, and it restores to the two inventors the legacy they deserve.

What listeners say about ENIAC

Everyone who assumes that von Neumann invented the computer (as I once thought) really owes it to themselves and the true inventors a listen to this fascinating retelling of the tale. Not overly "geeky," but not overly simplified either, this (audible) book finds the right balance to fill in the missing pieces of the invention of the computer. The *only* criticism that I have of the reading is the author's raised pitch when reading quotes from women. It sounds silly and somewhat demeaning, and isn't necessary to get the quote across. Otherwise the reader articulates well and is easy on the ears.

excellent book on history and ideas of computing

Except for the first dozen minutes that repeat what we all know about the computers of today, the rest of the book is a fascinating account of the background, the people, and the critical events in the early days of computing. I have never seen a more complete and comprehensive account of how the science, the technology, the engineering, the war effort, and most interestingly, the people came together to give birth to ENIAC. I learned for the first time the commercial efforts after the invention and before the dominance of IBM. Except for the beginning part, I find the content highly informative not only because of the detailed account of historical events but also because of the description of many of the early technical problems and solutions. As a college professor teaching computer science, I highly recommend this book for any one who is interested in learning the history and the basic elements of computing.

Good overview of how computers came to be

This is an outstanding title, so long as you understand what it does & what it doesn't focus on. This is a book that is more about the personalities involved in inventing the first "general purpose" computer, and the business aspects; and less about the technicalities associated with that computer. The author does a very good job making you feel what it was like to be there, the stresses & the frustrations & the triumphs of the inventors. The author also shows how inventing something that is memorable decades later is more about business than it is about fundamental innovation. Without the money, contacts, marketing organization & so forth, the computer would not have come to be, or at least as soon as it came to be. It turns out that the inventors did not have any of these attributes, but those who came after them (in competition with them, patent-wise) did.
The narration of this book is also outstanding.

Not as advertised or expected, but informative

This is an interesting book on the early history of the modern electronic computer. The main flaw as I see it is that the story of ENIAC is largely outlined in the first third of the book. The rest of the slender tome goes on to detail the extended battles over patent rights. Plenty of print is spent on the creators' battles with themselves, the marketplace, and the powers that seemed to conspire to deny them their proper place in computing history well after ENIAC was retired. I have read only a little heretofore about the intellectual property battles detailed in the book. The author clearly has written the book to take up the cause of Mauchley and Eckert as not only the driving force behind ENIAC, but to laud them as the actual inventors of the modern electronic computer. I'm not inclined to argue - I was just more interested in the actual history and capabilities of the ENIAC itself, and apparently that wasn't worth the whole of the book. Even later, as the author and the inventors move on to found the "world's first computer company" and struggle to create the more powerful successor the UNIVAC, McCartney seems more interested in detailing Mauchley and Eckert's poor business decisions, deteriorating personal lives, and extended legal battles rather than expounding on what UNIVAC could do and how much better it was than ENIAC. Having said that, I did enjoy the book and found it quite interesting. I very much liked how the author detailed the various hurdles the ENIAC team faced and how they overcame them. I apreciated how he put the efforts to build the ENIAC into the context of the ebb and flow of the 2nd World War. The U.S. Army funded the development of ENIAC and it's demands, yoked to the innovative solutions of Mauchley and Eckert, created systems and architectures that literally launched the computer age. Strange Note: The narrator actually reads the footnotes for the book - making a modest listen even shorter!

Did you know that the first "computers" were actually women who computed artillery tables during WWII, & the machine was named after them? That the first real computer programmers were also women? Or that if the U.S. hadn't been desperate for a way to compute more artillery tables for the War, ENIAC would probably never have been built?

As a computer science student trying to improve my general background knowledge about computer hardware & history, I loved this book! Somehow the class I took on Computer Architecture made alot more sense when talking about complex computer fundamentals in terms of cables and vacuum tubes rather than integrated circuits and D flip-flops. If you work in IT, want to better understand hardware, or are a computer and history junky, this book is for you! Also, Mauchly & Eckert may have been great inventors, but they were terrible businessmen. This book is a fabulous case study on how great innovation without business savvy can be taken to the cleaners.

I was hoping to hear even more about this history. The quality of the audio wasn't as good as other audible books, but I loved the content.

Computing history has never been as entertaining.

This is a fantastic audio book. Not only is the story interesting and the writing fluent, but also the narrator speaks with an intrigued anticipation, making this audio book an engulfing peace of obscure history. The only disappointment is that the last hour is dedicated to citations, so you really only get about six-and-a-half-hours of story. Although, I hate to call journalistic integrity a disappointment.

If you care anything at all about computers this is worth a listen.

computing history is made here!

This book is on the history of the world's first "real" computer, ENIAC. It portrays in
fascinating ways the times, circumstamce, and the peope involved in this veritable arithmetic monster. i still can hardly believe they eventually accomplished what they did. but not only that, successor computers populated academia, govenment and business for many decades to come. it also tells a little bit about the patent law suit with a rival company and related intellectual property issues whihc is a timely topic.
it's a fascinating, interesting, deep book that every computer lover should read.

Insights on the development of the digital compute

What did you love best about ENIAC?

Getting a better understanding of Prosper and Eckert

What other book might you compare ENIAC to and why?

Turing's Cathedral is also a history of the early days of digital computing, from a different perspective. Also very interesting.

A Great Intro To Computer History

A nice history of the creator of the modern electronic computer, and perfect for anyone who doesn't know where computers come from (my university students once guessed that the first electronic computer was made in 1886). McCartney does the basic job of covering the start of the computer age in this book, but he never really gets very deep. What surprised me was how much the author felt the need to include explanations of contextual situations, as when he mentioned the supply of gas ration coupons--the whole reason for such rationing had to be explained. This always gave the book a feeling that its target audience is ten year old school kids (and I am going to get my kids to read it). I also got the feeling that this ground has already been covered and it is so far from the event now that there is not much new to uncover.