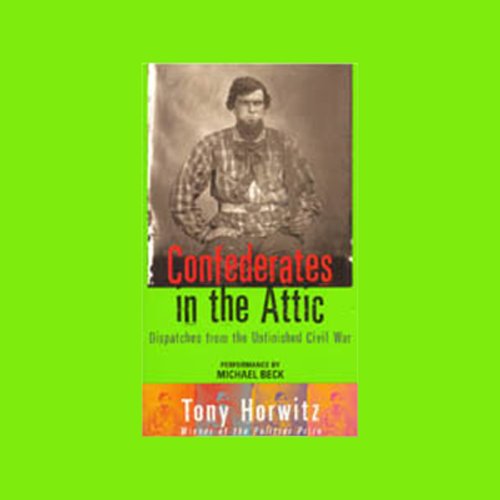 Confederates in the Attic

By: Tony Horwitz
Narrated by: Michael Beck
Try for $0.00

When prize-winning war correspondent Tony Horwitz leaves the battlefields of Bosnia and the Middle East for a peaceful corner of the Blue Ridge Mountains, he thinks he's put war zones behind him. But awakened one morning by the crackle of musket fire, Horwitz starts filing front-line dispatches again - this time from a war close to home, and to his own heart.

Propelled by his boyhood passion for the Civil-War, Horwitz embarks on a search for places and people still held in thrall by America's greatest conflict. The result is an adventure into the soul of the unvanquished South, where the ghosts of the Lost Cause are resurrected through ritual and remembrance.

In Virginia, Horwitz joins a band of "hardcore" reenactors who crash-diet to achieve the hollow-eyed look of starved Confederates; in Kentucky, he witnesses Klan rallies and calls for race war sparked by the killing of a white man who brandishes a rebel flag; and in the book's climax, Horwitz takes a marathon trek from Antietam to Gettysburg to Appomattox in the company of Robert Lee Hodge, an eccentric pilgrim who dubs their odyssey the "Civil Wargasm."

What listeners say about Confederates in the Attic

Not a Book to be Kept in the Attic

This book is an intriguing and highly engrossing journey through the eyes of Civil War reinactors. Being a Civil War buff, I expected to find this book interesting. What I found instead was a book that engrossed me completely. I learned so many things about Civil War battles and just average soldiers that I had never expected. The great thing about this book is that it is coming through the eyes of an outsider to the whole reinactment experience, so one gets a picture that is not initially biased.

You will be amazed at the lengths the "hard cores" go through to really live the authentic experience! You will also learn about race relations in today's South...pertinent issues that may get swept aside in the fray of current news.

This has been one of the most enjoyable and informational books I have. It started out with me laughing as I drove to work listening to it. But, after the first couple of chapters it was spellbinding. The writer is much like most 'Civil War' buffs with it being set in our time frame. As he travels through the south, meeting many different types of people, it was remarkable to realize the changes that still wrench some of the south's families.
I have a friend that travels with me on my ‘history’ trips (our families hate history) and she is black and I am white. I had never given it much thought until I listened to this book. We have so far only traveled in the north. If gives you pause to think of how a minority, I am sure, of people would be offended as we explore. One of the things that amazed me the most is how the author puts this all in a light of understanding and patience even though he found it offensive. I had never thought before about the southern war heros not having the same recognition as the north's. My friend is listening to this book now and I am so anxious to get her take on it.

Good, not sure about ending

I read this book in paper form first, as it was a book required by the U North Carolina required freshman reading (I find that list a very good recommendation of reading material!).
Then I listened to it on Audible, and was as enthralled with it as when I first read it. Hilarious at times, epsecially with the descriptions of the Jewish author's interactions in the South and with fervent Civil War re-enactors.
He tries to bring out how we're still effected, and how the war is continuing into modern society, but that's where I lost him. I never got a completed sense of conclusion of what the author learned, but maybe that's the message. Wonderful listen however, and heartily recommended.

If only it was all there

The book is so great -- and more timely today than when it was first published. My only sadness is the abridgment. I wanted it all. Had to go buy the printed book to fill in the blank spots.

Horwitz's exploration into the world of current and past confederates is an interesting one. The modern day Southern Rebel is fascinating. Tony's experiences with the Civil War reenactors stay in my mind. Some of the scarier characters also make an impression. Any fan of American history will enjoy this book.

Tony Horwitz uses his immersion in Civil War environments as the background for his real quest: searching for his own identity. With only shallow American roots, he probes the heritage of Southerners
to see what make them so fervent about their past. He discovers racial division and strife mingled with honor and decency, but doesn't seem to find in his travels the personal significance he yearns for. Well-written, with lots of good Confederate details.
I agree with another reviewer that this narrator's accents were very
annoying, but the author's constant cynicism toward anything "modern"
was more so.

Did the narration match the pace of the story?

he did a fantastic job with voices, but skipped while paragraphs, which sort of made me confused and angry.

Was this a book you wanted to listen to all in one sitting?

I have to fit class, but I wouldn't do it normally.

if I didn't have to read this fir class, I'd return it. I'm not impressed

Would you consider the audio edition of Confederates in the Attic to be better than the print version?

I own both the audio and print version, but read the print version first and couldn't put it down. I don't know that I enjoyed the audio version more, except that I am able to multi-task while listening to a book.

As a fan of the US Civil War period, I thoroughly enjoyed Tony Horowitz's recounting of his "civil war-gasm", as well as his thoughts about the various types of folks who participate in reenacting.

Was there a moment in the book that particularly moved you?

There are many moments that are particularly moving, especially as he is interviewing people about their modern thoughts on the US Civil War.

I feel this is well written, informative and entertaining. This is a book that I would read again and again.

The war isn't over!

What made the experience of listening to Confederates in the Attic the most enjoyable?

The reading is excellent.

What was your reaction to the ending? (No spoilers please!)

In the end, all these South supporting Civil War buffs and reenacters go home -- many to the North! But for the Northern reader it shows how much the Civil War is still in Southern thought.

Have you listened to any of Michael Beck’s other performances before? How does this one compare?

I have not heard this reader before, and he is excellent.

Did you have an extreme reaction to this book? Did it make you laugh or cry?

Although this is a description of entirely Southern views of the war, it is not in any way racist, and tends to give the impression (rather inaccurately) that the war was not about slavery.

I love this book

I originally read this book in paperback several years back but lent out my book and have no idea who has it now. It was so enjoyable the first time, it was worth a second read or, in this case, listen. A good modern non-fiction novel on how the South still hasn't gotten over the Civil War. As a Californian now living in the deep south, I often get called a Yankee. That is why I originally read this book - to help me have a greater understanding of why, over 100 years later, the natives still talk about the war. This book lead me to delve deeper into Civil War history.