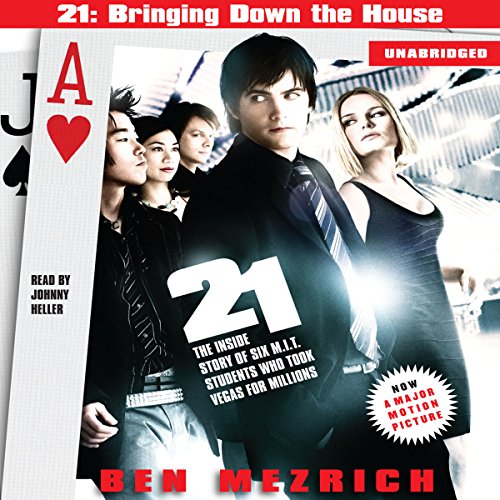 By: Ben Mezrich
Narrated by: Johnny Heller
Try for $0.00

In the midst of the Go-Go '90s, the culture of greed infused the MIT campus. A small blackjack club sprang up, dedicated to counting cards and beating the house at major casinos around the country. The Club grew slowly at first, but by the late 1990s, the right people had come up with the right system to take some of the world's most sophisticated casinos for all they were worth. In less than two years, this ring of card savants earned more than $3 million from corporate Vegas. This is the true story of how they did it.

Bringing Down the House is everyman's dream, certainly every gambler's dream, and gambling is a growth industry on the East and West Coasts.

A cross between Liar's Poker, Ocean's Eleven, and The Cuckoo's Egg, this fast-paced caper features the most unlikely of heroes, a bunch of super-smart MIT geeks. Before the dot.coms kidnapped the mathematical geniuses of MIT, here's what higher education produced from the dark underbelly of the Ivy League, where kids with brains, money, and bright futures were just as likely to be found gambling in a Paradise Island casino as putting in time in the library.

What listeners say about 21

The content of this book is very good and interesting. Unfotunately, the narrator does such a horrific job that it makes it almost unlistenable. I will NEVER buy a book if this guy is reading it again!

I have never wrote a review on here before. I am usually happy with all the narrators on the books I get here. This is horrible. I can't believe this guy is drinking and burping out loud on the book. I am considering just giving up and deleting the file.

I need to modify my review

Mr. Heller singlehandedly ruins this audiobook by drinking too close to the microphone, burping (don't do voice-overs and drink soda!)

This otherwise five-star book loses stars for this distraction.

Despite the bad reviews based on the "poor narration", I went ahead and got this book. There is nothing wrong with the narrator. There were no burps, gurgles, wheezing, or gulping to really notice. Not the best narration I ever heard, but certainly not worth some of the scathing reviews.

I like true crime stories, especially ones where the charater (or perpetrator) is a genuinly likeable guy getting over on the system (think Catch Me if you Can). This book rates right up there and was an exciting read. The movie with the same title does not compare, as it is completly re-written for Hollywood and changes just about everything. The book is MUCH better and details the life of the MIT students who used their brains to beat the system.

The only reason I didn't give it 5 stars is because the author switches back and forth from his point of view to the main character's, and proves a bit confusing at times. Other than that, an excellent book.

Liked the movie, loved the book.

I had wanted to read "Bringing Down the House" before the movie "21" came out, but Audible didn't offer it as an audio book until then. So I saw the movie first. I liked the movie so much, that I immediately downloaded the audio book as soon as I could.

Just like many books made into movies, there are numerous differences between the two, but they are both very enjoyable. However, I preferred the book over the movie just because of how much more detail is provided regarding the card counting techniques and team play. Even though the book lacked the cheesy romance (as played out in the movie), it more than made up for it by being more realistic and believable.

A lot of other reviewers noted the narration was sub-par. While the narrator wasn't the best I've heard, he certainly wasn't the worst. (Although he did sound a little like Casey Kasem.) If you're listening to this in your car, you most likely won't notice the recording flaws. However, they will become apparent when listening to it with headphones.

If you're interested in seeing the movie and reading the book, go see the movie first. I think if I had read the book first, I would have been more disappointed in the movie.

I too have listened to quite a few books over the past few years and I can't think of any book more exciting than this. Despite the corporate image Las Vegas has nowadays, I suspect this description of how the city really functions is probably accurate. When the group is getting caught (you know they had to--otherwise where is the story?) I found myself becoming extremely nervous. This type of reaction doesn't happen too often in listening to non-fiction. Definitely a worthwhile listen, maybe for a long boring car ride.

Let me start by saying that I have never written a negative review before. I found the story to be really interesting and entertaining. However; after five hours I'm giving up on the narrator. His voice isn't even that bad but the equipment used or maybe poor editing has resulted in every gulp/swallow being heard. After five hours it's like fingernails on a chalkboard.

This book held me captivated. There has been the big craze since this movie came out or maybe earlier, so I jumped on board. I listened to this book and then did internet research, granted many people don't consider that type research reliable, I did it because it was easier. From what I understand the author took some liberties which is understandable, I really enjoyed it. I am not going to go and start counting cards, but it made me talk to folks who are black jack fans alot more and see their take. Enjoy.

Much better than the film

As you will quickly discover, the movie may have been inspired by this book, and borrowed its premise and a few of its characters, but beyond that the two have little in common. The book goes into much more detail about the scheme, contains a raft of more interesting characters, is much more ambiguous about the morality of everyone involved, and does a much better job of explaining how it all ends up going downhill. It's likely more "reconstructed" than actual reportage: the scenic detail and quoted conversations are clearly manufactured from bits and pieces of reality, reconstructed into neater, more vivid people, images and events. But the conceit that this is all true does short-circuit any idea that the book will have clear heroes and villains, or that it will reach of Hollywood conclusion. I liked that about the book, frankly. It's well performed and thoroughly engaging. Credible? Well, part of the fun is guessing what's fact and what's embellishment. Kind of like gambling itself.

I'll echo the sentiments of the previous reviewer. How could this awful narration passed muster as professional? I mean, really, it is beyond a distraction to hear this poor guy swallow a huge hair ball and wheeze his way past his own tonsils every few paragraphs. It gets to the point where you are waiting for it...just....waiting for it and then you realize - wham! You just missed two minutes of dialogue! I couldn't finish the book. Just awful! If the Audible editors have any integrity that will post this review as is - we'll see..