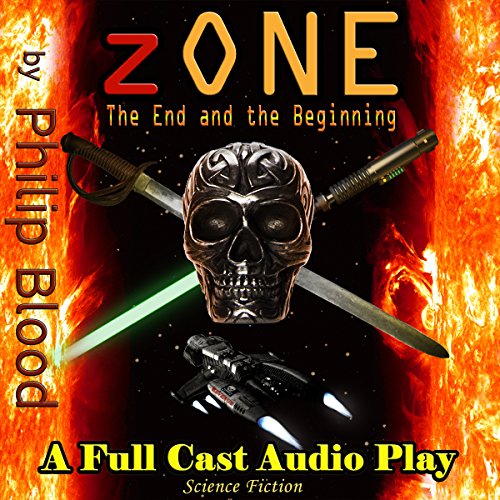 zONE: The End and the Beginning

Professor Hamilton wakes up in a hospital, wondering if he has had an illegal brain smear, since he is now missing parts of his memory. He must go on a journey of discovery to find out why he is the most wanted man on the planet and the most wanted Pirate in the Zones. He must enter a series of virtual reality worlds that are based on the great works of entertainment, art, and literature. His adventures alternate between an Earth ruled by the iron fist of a totalitarian government, whose agents are nicknamed Zombies, and the Zones, where he travels through different virtual reality worlds, like Deathworld, Wonderland, Hyperborea, Trekkie space, and many other famous stories.

While in the Zones, Thorten is hunted by the faceless Dragoon squads of Zcerebral Incorporated. To survive he must find the secret Pirate stronghold, gain his own amazing Pirate Ship, and use it to set sail across the various Zones to discover the true nature of these strange worlds and how the Zones started. He must face the dark powers that control everything and, while doing so, discover the truth about his life.

This is a story of adventure, mystery, romance, science fiction, and pirates, all set in the future, taking place inside many of the famous stories we all love and cherish. Come join Z as he jumps down the rabbit hole, literally, with his trusty Steward Loki and his Pirate companion, Mary Read, on an adventure as crazy as Alice in Wonderland mixed with Star Wars and Captain Blood.

What listeners say about zONE: The End and the Beginning

Nice , rump around the enter an outer verse

I really enjoyed this story the characters, are fun an relatable .
The virtual ( Zspace) aspect not completely unknown in realm
Of literature . Still done in a interesting an newish way . I don’t wanna compare it too
The obviously contemporary Ready Player One , but some of Virtual aspects of
are a little Familiar . Don’t get me wrong I like this story an not comparing .
Now too the issue I had with the audio book I enjoyed it yet there was an issue
With the Recording itself, seems to me the individuals recording each voice recorded at a different acoustics , pitch .
I’m thinking different studios different recording set ups not a huge Detraction .I still enjoyed it and all of the audio performances and would Purchase more in the style . this is my opinion .
I’m always about the story an this is a fun one .
I wonder if we will hear more from Zspace ?? In closing looking for a fun time, take a chance see if you like what’s the worst that can happen ...

P.s. if you are like me you always tried too get the Ratio right , I mean it seems like a waste too give up a credit for a book
2 hr It’s a complicated ratio credits don’t grow on trees . At least I don’t think audible gets em that way ?? But then again it’s Amazon who know , those people are crazy.
FYI Skynet will come from Amazon 🤔