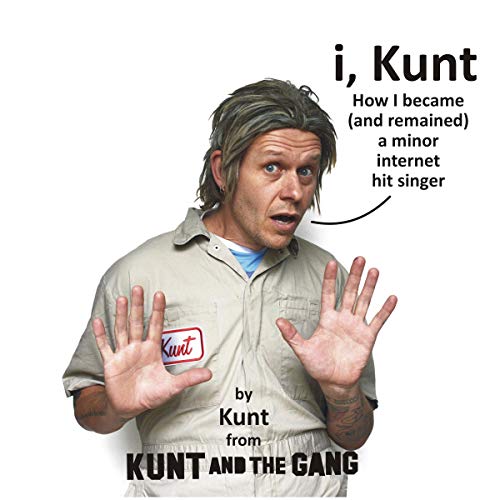 i, Kunt : How I Became (and Remained) a Minor Internet Hit Singer

By: Kunt
Narrated by: Kunt
Free with a 30-day trial

Remember that time an Essex Council odd job man rode the social media boom to become a minor internet superstar? No? Well, Kunt does, because it was him! In this audiobook version of i, Kunt, Kunt from Kunt and the Gang recounts in his own words the unique story of how he went from bedroom studio bod to award-winning comedy phenomenon, set against the backdrop of the good old days of social media, before the thought police took it over.

Between 2003 and 2016 Kunt and the Gang got over three million YouTube views, despite having their channel shut down; scored two of the least appropriately titled top 75 UK hit singles of all time; were ostracized by the Edinburgh comedy community over a misjudged advertising campaign involving stickers of crudely drawn penises; and organised the world's first ever dirty protest where literally tens of people tweeted jpegs of their faecal excrement to evil entertainment bigwig Simon Cowell. Oh, and got banned from Butlins.

What listeners say about i, Kunt : How I Became (and Remained) a Minor Internet Hit Singer

This is on a par with the Alan Partridge books as the best book on Audible. Laugh out loud funny road tales from Britain's best loved, and Yewtree's most feared Minor Internet celebrity.

More charming than the title would suggest

Growing up in the same part of the world at the same time (even seeing some of his earlier bands) always drew me to him, and this reading is a delight, although probably a bit "too alternative" for many, in case the title didn't give that away. Tales of the road, growing up in the pre-internet, post Depeche Mode Basildon through to a fairly unique level of fame and success never forgetting the tone of material that got him there or the audience it would attract makes this unmissable. Equally charming and obscene

Having had K*** play at my 40th birthday and met him at various gigs I already knew he was a top bloke but it was great to read / listen to how it had all started and the highs and lows of his brief fame. Loved every gig and reading about how some people just didn’t get it and took offence. If you’re not easily offended and love a laugh find out his stuff and give it a try :)

The people on the plane thought I was weird

I kind of like Kunt and the gang, enough for me to pick up his book but not enough to know he had so many albums I thought this would be a good book to listen to on the plane to a holiday, separated from my missus so nobody to distract me. Fairly confident the people next to me thought I was tapped and that I'd lost my carer as I continued to laugh out loud every 5 minutes Very funny book, worth the several hour run time Would totally recommend to anybody who likes Kunt or has at least seen one of his videos

Brilliantly delivered and told story which several times made me laugh out load and left me sniggering days after. Kinder sad when it came to an end really as I was enjoying it so much. I wouldn't go as far to say Kunt is a comedic genius but he is without a doubt a complete cunt!

hilarious listen of the trial a tribulations of a minor internet hit singer. Read by a man who sacrificed his time and efforts to perform across the country and world. To bring joy and laughter to the wrong minded people (myself inculded). This brave soul had to endure many a lonely wank in a travel lodge for us and once had to shit into a bin. He's like a modern Jesus.

I highly recommend this to anyone who does or doesn't like kunt. the story is inspiring on a level that means you can make something out of anything so if you are a crude cunt you can become minorly known and if your a sensitive cunt you can also have minorly piss taken out of you.

Well worth checking out. The highs and lows of minor internet stardom in great depth and detail

I absolutely loved this. Backing it on Kickstarter was one of the best things I ever could do. Kunt regales us with his humble beginnings, all the way to the very end and his last tour, filling it with so many funny anecdotes, memories and over-the-top shenanigans. This is a must listen for any fan of his and even for people who enjoy a good laugh.

Just buy it. A superb book. This guy is a... Genius? Four words remaining. Fucksticks.