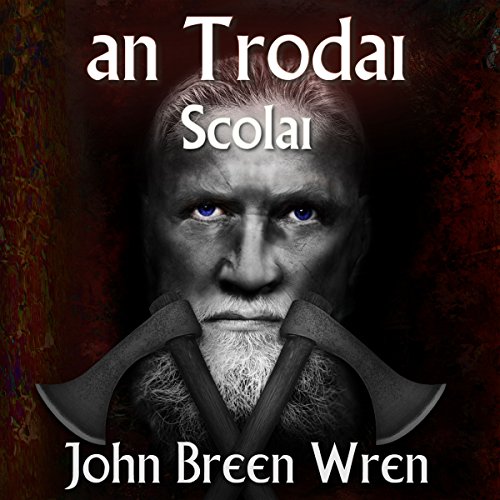 By: John Breen Wren
Narrated by: Meral Mathews
Try for $0.00

A raiding Norse pirate rapes a young girl in 9th-century Connacht, Ireland, and leaves her for dead. Shamed by her pregnancy and wanting a life without the label of Norse for her child, Ceara makes her way south to Ceann Coradh. She is befriended by a couple who run an inn and recently lost their only son in a battle with the Dublin Norse and treat her as they would their own daughter. Ceara tells her new family about a frightening dream she had while traveling to Ceann Coradh. True to the dream, Ceara dies giving her son life and the story of her nightmare will follow her son and his sons after him, forever.

Scolai grows up as the son of the inn keeper and his wife and displays some of the rougher characteristics of his natural father. He loves the game of hurling, and even more, the resulting fights. He plays and fights with an energy that draws the attention of Cennetig, the son of the tribal chieftain, Lorcain mac Lachtnai. His friendship with Cennetig results in his introduction to warrior training, usually reserved for nobles and the sons of proven warriors. Scolai finds his true calling in battle and earns the respect of his leaders and fellow warriors.

One of my favorite genres is historical fiction. I enjoy them for the little tidbits of insight into a time I am often unfamiliar with. Unfortunately, this book had very few tidbits. The story was enjoyable and I was interested until the end, but, I would have preferred more detail added to the story to immerse me a little more into the time period. The book is the life story of one man who wishes to and does become a warrior, but, does not delve too deeply into relationships or the society of the time. I found the ending to be abrupt and despite enjoying the story, I never felt a strong connection to the characters. I would be willing to read another book by this author to see what he is capable of.
The narrator did a good job bringing life to the characters and I would enjoy listening to a book by this narrator again.
I was given this free review copy audiobook at my request and voluntarily left this unbiased review

Amazon Prime has a lot of perks- I thought I'd try this one...it's hard to find time to read and great to have a good story while I drive or fold laundry!
This one seemed interesting since I'm Irish...and it was! The story pulled me along and I enjoyed the historical side of the long-ago adventures.
The narrator has a deep, smooth voice but manages to sound like a women when he needs to- you don't always find that in audible books. I loved the bit 'o Irish accents too- not overdone!
This is a good "read"!!

This is a very interesting read/listen. I was hooked from the very beginning and finished in one sitting. I am anxious to listen to the next book! The narration is very well done. Overall, it is an excellent book. I received this audiobook via audiobook boom and voluntarily left this review.

From the synopsis, I was expecting something like a norse mythology story. But the book actually doesn't have much of that kind, other than the "real father" being a norse pirate. As the story progressed, it didn't quite interest me. It was mostly just like any other "abandoned child raised by others" story.

I received this book for free from the author / narrator / publisher, in exchange for an unbiased review.