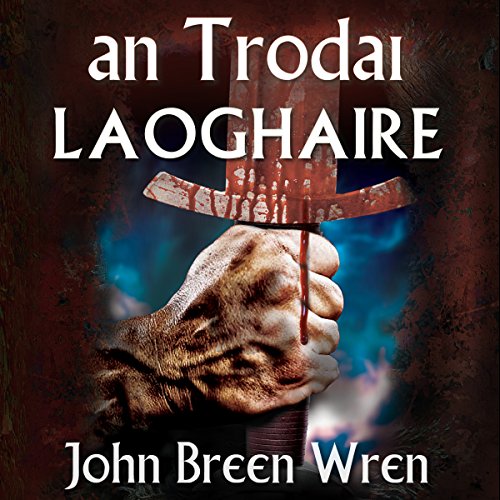 By: John Breen Wren
Narrated by: Meral Mathews
Try for $0.00

The fall of Cennetig mac Lorcain in 951 AD in a battle against the High King of Eirinn, Congalach Cnogba, began the succession of three of Cennetig's sons to thrones. Latchna followed his father as King of Thomond and less than three years later, Mathgamain mac Cennetig assumed the throne when Latchna was killed. Mathgamain and his brother, Brian, defeated Ivar of Limerick in 967 AD in the Battle of Sulcoit and Mathgamain took the title, King of Cashel.

In 970 AD Mathgamain deposed Mael Muad mac Brain and took the title of King of Munster. Mael Muad resumed his kingship of Munster after murdering Mathgamain in 976 AD and Brian mac Cennetig now led the Dal gCais. In 978 AD, Brian defeated Mael Maud in the Battle of Bealach Lechta and began his rise to power.

The an Trodai saga continues with Daigh and Saraid raising their three sons in Medieval Ireland. Ceara, Daigh's grandmother had a dream in 893 wherein she was visited by a dark figure of a woman who threatened to take her then-unborn son and all his sons after him to become great warriors.

Neither Scolai nor Daigh were taken, but both became warriors for the Dal gCais. In 944 at the Battle of Gort Rotachain, Scolai was killed and Daigh severely wounded. Able to get around with a limp and an occasional crutch, Daigh became a full-time farmer as he and Saraid raised their sons, Garbhan, Laoghaire, and Tanai. One will die, one will become a farmer, and one will become a great warrior, fighting alongside of the future High King of Ireland.

This fictional story follows real events and people of the late tenth century in southeast Ireland.

What listeners say about an Trodai: Laoghaire

I previously listened to An Trodai: Scolai. I was unaware then, that this is a series. I wish I could edit my review of Scolai since, I now know it’s abrupt ending just leads into this book.

This series seems to be the story of the legacy of a family of warriors. For a historical fiction book, there is not a lot a detail about the everyday life in the times it is set in. This is more like the bio of some warriors and leaders, and their battles within conflicts that truly happened in history. It is a good story that is condensed and short (that’s surely why not much is invested in describing more of their situation). I felt more connected to the main characters in this book, than in the previous one.

The same narrator is used for both books and I enjoyed the rendition he provided. His use of accents was pleasant, his female voices were well done and he brought out the characters personalities well. I would listen again to another story by this narrator.

There are no explicit sex scenes or excessive violence or swearing.

AnTrodai: Loahaire written by John Breen Wren
Narrated by Meral Mathews
I was voluntarily provided this free review copy audiobook by the author, narrator, or publisher.”
The historical events in this story are actual events. It is an exciting history if now well known.
Wren traces the history using the fictionalized family lines beginning with Daigh’s grandmother has a prophetic dream predicting that the sons of the family were destined to become great warriors.
Through the warriors’ struggles, falls and continued family, we see history unfold as the historical sons of Cennetig rise and fall to rule the tribes of Ireland. The battles are retold in a narrative style. The stories are exciting, however if the story was revisited and the characters further developed with more dialog and more guiding the reader to visualize the scenes the story could well become a grand novel.
I gave this a 4/5 because historically it is sound and the story is a good one.
I believe Meral Mathews narrated the story well for the material and style.

I re curved this audio book free of charge from the author for a review.

Overall I liked This audio book. I thought the narrator was just OK, could have had more inflection. I would have liked a bit more character development to fill in the time gaps. That would have made for a longer story, but would have made the characters more likeable.