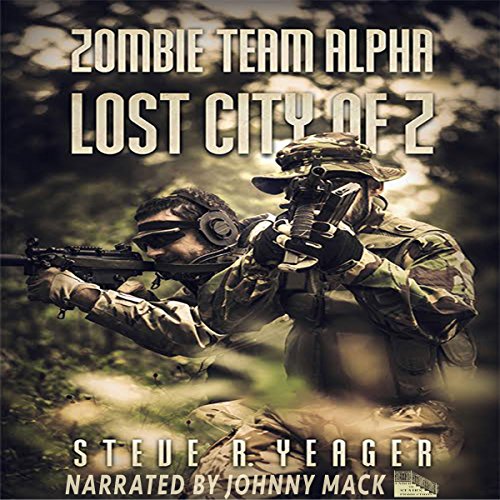 In 1925, Colonel Percy Fawcett and his son Jack set out in search of the Lost City of Z. They are never heard from again.

Back from fighting zombies in Russia, Jackson Cutter was enjoying an extended vacation with his new girlfriend. But when he and his team of specialists are hired to travel to the Amazon Basin and figure out what happened to Colonel Fawcett's ill-fated expedition, he discovers the true meaning of the Lost City of Z.

After the events of the first book, Jackson Cutter is enjoying an extended holiday with his girlfriend, but it's going to be cut short when they are asked to trek to the Amazon Basin to find out what happened to the ill fated expedition of Colonel Percy Fawcett and his son Jack. What he finds is beyond their imagination!!

Plot wise, I loved this. It had an almost... Indiana Jones feel to it!!! I loved the adventure that the setting brought. A place like that holds it's own nightmares to deal with, but when you add in Zombies, well it just makes for one heck of an adventurous read!! Also, I loved the spin on how the Zombies came about. it was unique and pretty awesome.

As for the characters, Jack is as flawed as always!! He has had to get over a lot, and the drinking and his new girlfriend have helped, but deep down he enjoys the hunt. He is strong, capable and a great character to read. He is well written and developed, as are all the characters really!!

In all, this was a great read. I think I enjoyed this more than the first, even though this doesn't have as many zombies in it, because of the adventure and the character development!

Johnny Mack was easy to listen to and read this well. I did find that he didn't differentiate some of the characters enough though, especially the females. Other than that, I thoroughly enjoyed his performance.

The Team is back with another mission. Thrilling action and suspense fill this story as the team come up agsinst dangerous scenarios and uncover mysteries. The narrator does an fantastic job - clear, smooth, passionate voicework. Very enjoyable and definitely recommended.

The team has been hired for another run

Time to find another artifact. One cost you your wife, the next one killed hundreds and you and your team barely made it out. Now you are being hired to go after another one. Will you make it? Will your team make it? What are the ramifications of this discovery? Helluva great zombie series. A twist that will remind you of the video game dead space. Enjoy. I was voluntarily provided this free review copy audiobook by the author, narrator, or publisher.