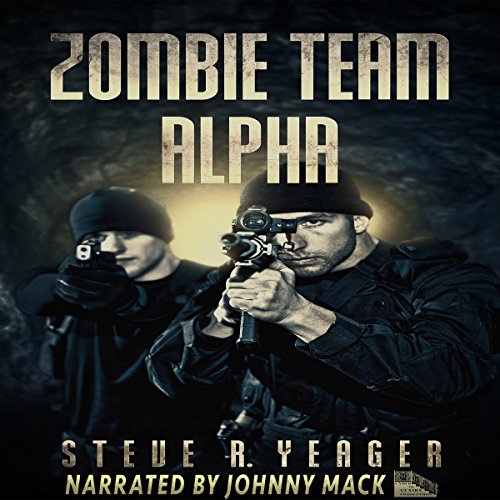 When a mysterious artifact is unearthed at a remote mining facility in Russia, those who come in contact with it are infected by something beyond imagination, something terrifying, something that has but one burning desire - to feed on the flesh of the living as a way of spreading the infection.

Jackson Cutter and his team of recovery and security specialists have been called upon before to put down such an outbreak, but it cost them dearly. Now Cutter lives on a boat in Barbados, lost in a fog of rum and tequila. When remaining team members Kyle Gauge and Morgan Crow find him, they seek to persuade him to leave his extended vacation and return to the land of the living, because if he doesn't, it will quickly become the land of the walking dead.

Action packed zombies with a twist

Imagine if Indiana Jones was present day, ex military with a small team. They are hired for an obscene amount of money and sent on a quest to find an artifact deep in an illegal Russian mine. An artifact like one they failed to retrieve before from elsewhere. They suffered great loss before. Can they succeed this time? Should they succeed? What can be released upon the world? Well written and narrated. A 4 because the lack of resolution on the artifacts origins, what it is how it works etc. I would have liked to have gotten that information. Otherwise very enjoyable and quite different. I was voluntarily provided this free review copy audiobook by the author, narrator, or publisher.

Deep in the mines of Russia, a mysterious artifact was unearthed. Those who came in contact with it, become infected with something terrifying! While the outbreak is contained to the remote place for the time being, their are certain people who would love to get their hands on this artifact. So they hire an elite team of recovery and security specialists to retrieve the item. Jack Cutter and his team had already attempted to retrieve a similar thing before but things went horribly wrong and Jack lost someone close to him. Will this mission be a success or will the outbreak spread before they can retrieve the only thing that can help?

I was pleasantly surprised with how much I enjoyed this! The book starts with seeing the miners find the artifact and from the second they touch it, they are infected. It was a very novel and unique way for the outbreak to begin. I also liked how the book wasn't really focused too much on the Zombies, but on the groups struggle to get the artifact. The plot was well written and fast paced and moved along steadily.

Character wise, Jack was a strong main character. He is deeply affected after they attempted to retrieve the first artifact and he lost someone he loved, but with a pay out of 4 million dollars, he can't turn it down, and he reasons that since they know what to expect, they won't make the same mistakes again. All the characters well written and developed and easily likable.

In all, this was a fast paced and engaging read. It's a unique and enjoyable take on the Zombie outbreak and I can't wait to see more from this world and these characters.

Johnny Mack did a really good job bringing this to life. He had a different variety of tones and knew when to ramp up the tension when needed.

*I received a copy of this via Audiobookboom but voluntarily reviewed it. This in no way affected nor influenced my thoughts.*

Good variation on the Zombie Theme

Good story, good narration. Entertaining with a few twists. Well developed main characters with the lesser characters, not so much.

The fact that the zombies in this listen are created using a device and that the people are still inside themselves and aware of what they are doing makes this a really unique twist on the zombie apocalypse theme. Most of the time, the apocalypse comes about due to a virus or something similar. This, to me, read more like an adventure thriller.

I still liked it. The flawed leader of a special ops retrieval for money group was a compelling character. Jackson Cutter is still trying to drown himself in alcohol to forget that his wife is dead when his old team comes calling and, literally, blackmails him into leading them again. And not only leading them in a retrieval operation but the same, failed mission that took his wife from him. This does not make Cutter happy.

Once they finally make it to the retrieval site, they quickly realize that things are all wrong and they have been set up. They just don’t know who set them up, why, and how they are going to make it out alive. The focus is less on the zombies and more on the main characters doing everything they can to keep each other alive.

Johnny Mack’s narration is great. His voices and accents are really good and he uses his tone and cadence to increase the suspense and tension in all the right places.

I wanted to like this story more than I actually did. It had the components to make a really good story. I received this audiobook for free through Audiobook Boom for my unbiased review.

An experienced Special Ops team is hired to retrieve an artifact from a closed mine in Russia. The twist is that this artifact is controlling the zombies that seem to be protecting it. Our team led by Cutter has done this type of mission before. The last mission got Cutter’s wife killed and sent Cutter into a drunken slump in Barbados where the other two team members found him. Sobering him up and getting him mission-ready got the team available for a $4M payday. Now all they had to do is pick up the boss of this mission, a Dr. Martinez, head to Russia in their Gulf Stream, grab the artifact and head home. No problem right? Accompanied by a Russian Colonel Subarov and a squad of teenage soldiers they all head out. Of course nothing goes as expected and the zombies are much more dangerous than anticipated. As the soldiers are picked off, tension mounts and the desire to scrub the mission escalates, but the Colonel and Martinez are persistent. Another team of mercenaries arrive topside unknown to Cutter wanting the same artifact. Will Cutter be able to avoid the zombies and the mercenaries, get his team, Martinez and the artifact out of the mine and safely on their way home? Stay tuned. This audiobook was given by the author, narrator, or publisher at no cost in exchange for an unbiased review via Audiobook Boom.

This is a fast paced, high action, military science fiction novel with non-traditional zombies. What makes it stand out is that the zombies are not really the focus of the story but rather a side note to the main story. Well developed characters and narration is great too.

First chapter started off fast passed. Then 3 hours later!!! The action came back. I honestly would not have finished this if I had not promised to give a truthful review. So my review is, DON"T WASTE YOUR TIME!!! I received this audiobook for free for an honest review.

This story and characters are interesting and entertaining. Fantastic action and thrilling suspense fill this story as the team unveil hidden agendas and dangerous scenarios. The narrator does an amazing job of bringing this all to life for the listener with clear, smooth, passionate voicework. Very enjoyable and definitely recommended.

Would you consider the audio edition of Zombie Team Alpha to be better than the print version?

I don't know, i have only listened to the audio version, but i don't believe the print version would be any better. the author had a lot of lines that were repetitious. Stating the same thing but in a different way, is still repeating yourself

What was one of the most memorable moments of Zombie Team Alpha?

The pilots of the helicopter. That part really made me "sit up and listen" much more than the previous parts of the book.

I think the part in the mine near the end of the book. I don't want to give anything away, but there is a part right there that makes you really think about the artifact a little different.

I am not sure, i am bad with tag lines