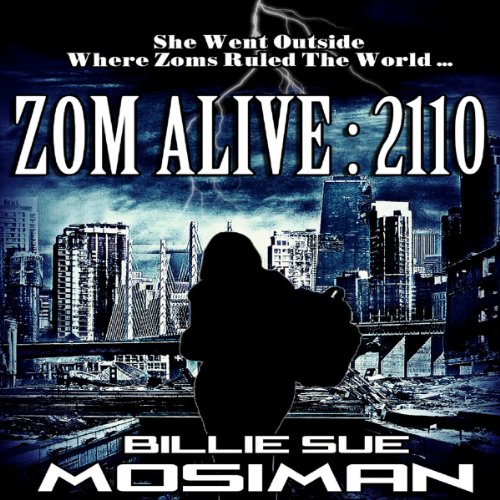 By: Billie Sue Mosiman
Narrated by: Shandon Loring
Try for $0.00

She escaped her underground world to go outside where the Zoms waited. She believed her chances at survival were greater among the insane. Baya, orphaned in the underground city, found it impossible to avert danger. The inhabitants were losing their minds in the crowded darkness. Outside lay the Zoms, those infected by a worldwide virus that affects the brain. Now they're more like animals, more like their ancestors of old. They aren't dead, not by a long shot, but given the chance anyone they meet will face death.

The Zoms have lost all control and there's no turning back. They're made to kill. Baya, on her own, liked her chances more on the Outside. She had her backpack and she had her hope. There was more freedom in the outside world, but there was more risk too. If Baya was going to make it she had to find a safe place. Was there any safe place left on Earth? That was the question she must answer for herself in Zom Alive:2110 .

"A short story (novella) packed with fully developed characters, conflict, emotional angst wrapped up in a plot that keeps the pages turning. Well written and highly recommended." (Karen Bryant Doering, Parent's Little Black Book)
"I've recently been reading a lot of zombie books, so when I discovered one by the talented Billie Sue Mosiman, I had to read it. I was very impressed. Not only is this a different version of zombies, but it is so well written you cannot put it down." ( Hobbes End Reviews)

What listeners say about Zom Alive: 2110

Is the narrator drunk?

The story is very well written and interesting I was hooked after a few minutes.
I normally prefer listening to audio books but I had to switch to kindle for this one.
The narrator killed the book and mood totally.
I can't decide if the narrator is drunk or he is trying to be dramatic or just is that bad. Especially when he is narrating the killer character he sounds like he is drunk. The other characters are bad but not as bad as killer