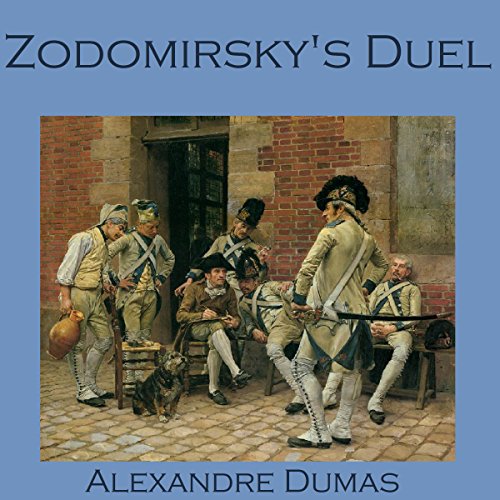 By: Alexandre Dumas
Narrated by: Cathy Dobson
Try for $0.00

Alexandre Dumas (1802-1870) was one of France's best-known and most-prolific authors. He excelled at many genres, but is probably best known for his stories of high adventure and dashing derring do.

In Zodomirsky's Duel, he tells the tale of an unusual duel between officers in a regiment stationed on the Austrian border. A new officer has arrived, Lieutenant Zodomirsky, who is betrothed to the beautiful Mademoiselle Ravensky. The dour Sub-Lieutenant Stamm is far from impressed by the handsome, popular, and wealthy newcomer, who also has a reputation for being overly hot-headed. Stamm himself had secret hopes where Mademoiselle Ravensky was concerned.

Stamm goes out of his way to insult Zodomirsky, which inevitably leads to a challenge to a duel. But Stamm sets some very unusual stipulations as to the method of the contest... which means that Zodomirsky's natural advantage in any armed combat is quickly reversed.

The outcome of the duel is completely unexpected and more terrible for both parties than anything either of them could have conceived.

What listeners say about Zodomirsky's Duel