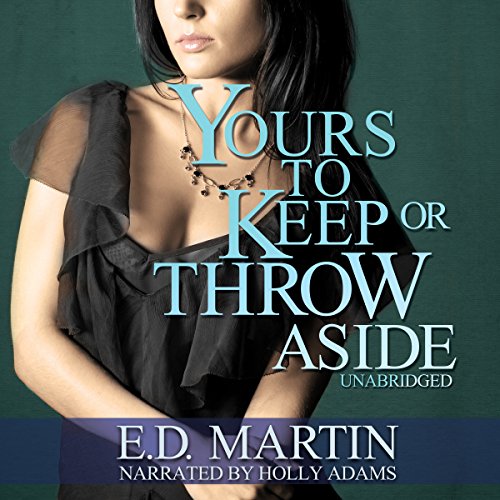 Yours to Keep or Throw Aside

When her husband David's infidelities are revealed, shattering the perfect life Kasey Sanford thought they'd created together, it's a wake-up call that she's lost herself along the way. She demands that David move with her to a new town, to a fresh start for their life together.

Kasey loves the freedom of reinventing herself, including her new friendship with police officer and soldier Andrew Adams. Andrew is handsome and charming, and his interest in Kasey awakens feelings she'd rather have for her husband, who pushes her further away with each of his alcohol-fueled outbursts. Intent on preserving her marriage for the sake of her young daughter, and with no one else to confide in, Kasey turns to Andrew for support.

But Andrew's own life is falling apart as he's put on standby for another deployment, triggering painful memories he'd rather ignore. He'll do anything to forget the soldiers who didn't return home with him, his stillborn son, and all those he's disappointed, including God.

As their relationship grows, Kasey must decide if she will repair her marriage and remain with the man she's always loved, or if she will give up everything she holds dear to save the soul of a man she barely knows, a man who fights her at every step, a man desperate to regain his faith in God, in humanity, and in himself.

What listeners say about Yours to Keep or Throw Aside

About a year ago, I read and reviewed the paperback/ebook version of The Lone Wolf by E. D. Martin, and very much enjoyed this character driven story. Because I found the story so engaging, I purchased the audio version via Audible.com .

The Lone Wolf is just over eleven hours of listening. There is an old axiom about audiobooks and this story falls well into the parameters: A good narrator will make an already good book better. It is wonderfully narrated by Holly Adams, all voices nicely done, including those of men and a child. This is a story of infidelity, loss, love, frustration, parenting, belief in one’s self and God, tragedy, joy, sadness, the travesty of post-traumatic-stress … it’s really all there, and very true to life.

Even if you have the paperback and/or Kindle/ebook, do yourself a favor and listen to this story. It is truly an amazing insight into the human condition and delightfully read by Holly Adams.

Would you consider the audio edition of The Lone Wolf to be better than the print version?

I am blind and do not have access to the print version. I would guess, yes.

What other book might you compare The Lone Wolf to and why?

Gone Girl. The daily struggles of the couple and unexpected twists. Lone Wolf is much less dramatic but, still very interesting.

Which character – as performed by Holly Adams – was your favorite?

I've been blind and listening to audio books for years. I have to say, that this is the first time that I was so moved by the narrator! The narrator, Holly Adams was so engaging, it was exciting to listen to this story. Usually when I listen to an audio book I focus on the story and forget the narrator but, Holly was so extraordinary at reading it that she really made this book come to life! At one point I stopped and had to remember that it was a woman who was reading the male voices. Holly does such and excellent job, her voice is flawless.

The story itself is thoroughly engrossing and riveting. The story develops quickly and held my interest. Some of the twists and turns were really unexpected and combine that with an amazing narrator it makes this story a great listening experience!