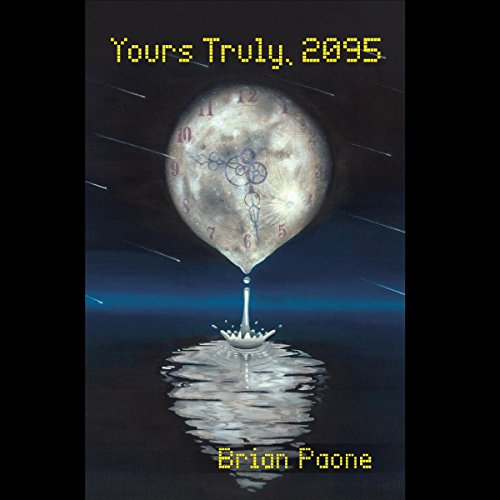 By: Brian Paone
Narrated by: Sean Michael Hogan
Try for $0.00

Jeff Blue - the victim of a time-travel conspiracy - wakes up trapped in the year 2095. The only familiar face is J0, a robotic copy of the wife he left behind in 1981. But can she be trusted? J0 could be the only key to unlock Jeff's journey home, but it will require her to do something against her programming , something human.

During Jeff's perilous journey through the future, he will have to discover the truth about J0's origins, and solve the mystery behind how he wound up in 2095, in order to uncover the reality of his own destiny.

Armed with a one-way ticket to the moon, Jeff must race against the clock to seize what might be his last chance to return home to his time. A time without hover cars, Justice Computers, or TeleSkins - a time over 100 years ago.

What listeners say about Yours Truly, 2095

This is a fun take on one of my favorite bands. Mr. Paone takes the goofiness of a concept album and distills it into a sensible narrative, but it's still full of references and nods to Electric Light Orchestra. Excellent!

Enjoyed the book overall. Some fun turns with an unexpected ending. A little bit of a slow start but it still kept me engaged. Good narration.

Time Travel with a twist. Not TRULY here or there

Would you consider the audio edition of Yours Truly, 2095 to be better than the print version?

Did not read the printed version

Which character – as performed by Sean Michael Hogan – was your favorite?

Sean Michael Hogan did a great job on all of the characters, He makes it easy to listen to and is able to keep your attention very easily

Yes because it was so well thought out

Three for the effort and good plot

I'm not sure yet. Maybe? The plot was great and I was relatively eager to learn what happened next but as the story continued, I grew less interested because of his internal changes. I also didn't understand the "stronger body" last-minute bounce thing. Overall, though, it was decent if you disregard the ending. I liked the dream sequences and every transition in the story flowed beautifully. But...

The ending made me lose every ounce of respect I had for the main character. He loves a robot and his wife and it took less than two weeks to fall in love with the robot. He also was willing to leave his wife in the future so the robot could have her body. His reactions to things were dry and a bit unrealistic, and it was easy to find a stopping point because the narrator gave a step-by-step-by-step account of everything happening. If I didn't know what he was eating the first time he said it, I was reminded the second. I also didn't think the reader matched the character; however, I don't usually listen to audiobooks so it might just be a "me" thing.

This might sound like I hated the book. I didn't. I wouldn't watch a movie about it or read it again, but the intricacy of the book itself was amazing. The 929 and the fluid, simplified descriptions and explanations of the future and how things worked was very well done and must have required a ridiculous amount of research, knowledge, or both. Both. That part alone amazed me, but the book slowly died for me as it went on.

The extreme attention to detail in a foreign, normally cliché world. Least interesting was every bar scene and the ending.

Who would you have cast as narrator instead of Sean Michael Hogan?

I'm not an avid audiobook listener, so I don't know. But, although he did a great job, I don't think his voice fit the character.

Was Yours Truly, 2095 worth the listening time?

Yes and no. Yes because it was so well thought out and no because reaching the ending just made me hate the character. I don't need a cliché ending, but I don't need an ending that makes me think, "Of course a guy would do that."

Keep writing and thanks for sharing! I'm sure I'd read another book by Paone at some point.

My Kind Of Story

Beautifully written and filled with science fiction, love and humanity. A great read. One of those stories where you want to live in that world for a few more days.

Time Travel with a twist. Not TRULY here or there

I enjoyed this book, more than I anticipated. Time travel but not Truly. The ending made me wish for more and it left me hanging. Great presentation of a tried genre.

The narration was good. Not great but good. My only comment is I would have liked to know ALL the characters in the book. Without a spoiler, that is all I can say.

I was gifted this book in return for an unbiased review by Audiobook Blast. Thanks.

What did you love best about Yours Truly, 2095?

"After finishing Yours Truly, 2095 and sitting for a few minutes when it was finished in silence, I have to say I can understand completely why this has been nominated for a Hugo Award.

Not only was Brian able to capture my attention from a early point in the book, he allowed me to imagine what was going on in the book through his word choices, descriptive phrasing, and showing more than telling.

I thoroughly enjoyed this book and initially was going to listen to this prior to falling asleep. However. I found that was not even possible as I was too engrossed in the story line. I ended up listening for about 3 hours a night and am very glad to have good headphones.

I can't say enough good things about this book. If I did, the dictionary would be emptied of many words!"

What other book might you compare Yours Truly, 2095 to and why?

I honestly don't really know what other books I could compare this to. I don't usually read or listen to books of this nature, but I can now say I would if they were as good as what Brian wrote.

What does Sean Michael Hogan bring to the story that you wouldn’t experience if you just read the book?

He makes it easy to listen to and is able to keep your attention very easily.

I can't really say what exact moment in the book moved me, but where he found out she was a robot really caught me off guard.

If you want a book that will keep you intrigued, this is what you want.

It'd be hard to change anything since this is from the authors imagination.

Most interesting is trying to picture how technology would be in 2095. I didn't have a least interesting aspect. It was well thoughtout.

Which character – as performed by Sean Michael Hogan – was your favorite?

JO was my favorite because her role is the most interesting to me.

Could you see Yours Truly, 2095 being made into a movie or a TV series? Who should the stars be?

Yes it could be made into a movie. I'd say Leonardo Dicaprio as Jeff and Mila Kunis as JO


Yours Truly, 2095 has time travel, some romance, a little action, and a dash of consistency. The plot winds around a bit, but is fairly tight and seems thought through. Paone does to ramble often, especially with the stilted dialog, and the novel tends to go off on tangents that aren't integral to the story. Jeff, the protagonist, is annoyingly indecisive and vacillates his motives constantly to the point of being almost schizophrenic. If the main character was actually likable, it would have made for a better story.

The narration of the audiobook was competently done by Sean Michael Hogan.

An interesting and different take on time travel

What I really liked about this story is the original and refreshing way to address time travel. The "bouncing" tech was cool. The robots programmed with the memories of their human counterparts was also a nice touch. I would have liked to see a few scenes of Jeff's descendant wrecking mayhem in 1981, but that doesn't take anything away from the overall work. All in all, this was a pretty good story that kept me guessing through most of it. The one little thing that irked me, at the end, is Jeff's lack of compassion for what will happen to his wife's consciousness in the future. JO's consciousness replacing Julie's in 1981 is a nice twist, don't get me wrong, but I still feel bad about the real Julie.

It's better than I was expecting. The time travel method is handled with a more modern twist. So okay the story is based around the ELO album Time. But there was a couple of places that references made me roll my eyes a little. Not to give anything away I thought there was an obvious explanation how time didn't change at the end.
Give it a try.