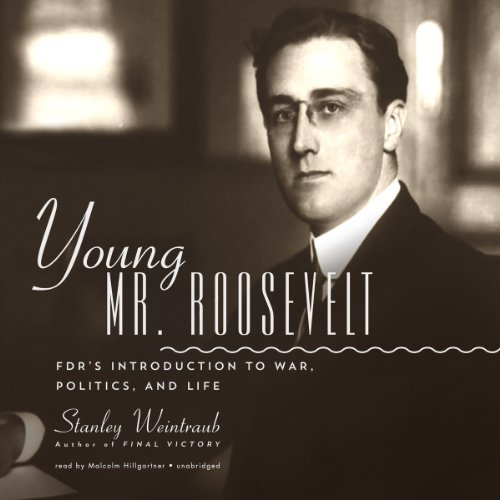 By: Stanley Weintraub
Narrated by: Malcolm Hillgartner
Try for $0.00

In Young Mr. Roosevelt Stanley Weintraub evokes Franklin Delano Roosevelt's political and wartime beginnings. An unpromising patrician playboy appointed assistant secretary of the Navy in 1913, Roosevelt learned quickly and rose to national visibility during World War I. Democratic vice-presidential nominee in 1920, he lost the election but not his ambitions. While his stature was rising, his testy marriage to his cousin Eleanor was fraying amid scandal quietly covered up. Even polio a year later would not suppress the ever indomitable Roosevelt and his inevitable ascent.

Against the backdrop of a reluctant America's entry into a world war and FDR's hawkish build-up of a modern navy, Washington's gossip-ridden society, and the nation's surging economy, Weintraub summons up the early influences on the young and enterprising nephew of his predecessor, "Uncle Ted".