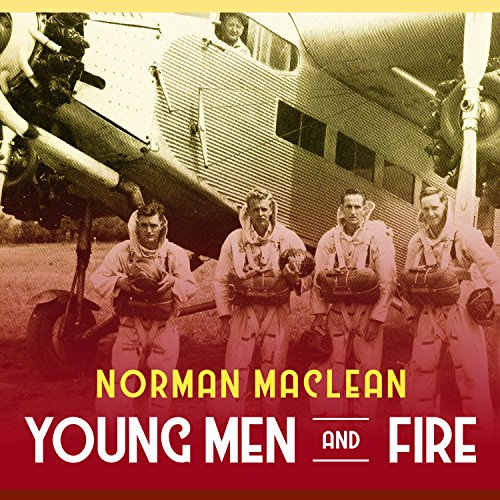 On August 5, 1949, a crew of 15 of the United States Forest Service's elite airborne firefighters, the Smokejumpers, stepped into the sky above a remote forest fire in the Montana wilderness. Two hours after their jump, all but three of these men were dead or mortally burned. Haunted by these deaths for 40 years, Norman Maclean puts back together the scattered pieces of the Mann Gulch tragedy.

What listeners say about Young Men and Fire

This book was not finished in Maclean's lifetime and you can tell. Although the research is superb, and certain sections magnificent, it meanders and desperately needed a good editor. It is still a fine book and worth the trouble, but bear this in mind.

I had read this book, and was glad I had my printed copy to refer to the maps. But either way, it is one of the greatest books I have ever read. It is tragic, and magnificent.

Going to listen to the rest of Mclean's writing now. Superb writing and magnificent narration.

A Tragedy, A Mystery, A Poem For The Dead

The greatest strength of "Young Men and Fire" is its way with words, its turns of phrases, its shocking imagery. It's like the Literary version of Creative Nonfiction, just beautifully written.
The first part of the book is of the fire itself, of the young men, some mere boys, who didn't even have a chance to try to fight it, but were running for their lives within mere minutes of its blowing up.
This is followed by Norman Maclean's efforts to really get at what happened, complete with going back to the scene several times, as a relatively aged man, to find juniper bushes, crevices in rocks where two terrified men could squeeze through, rusted cans with two punctures in the rim, to see if the crosses for the dead are where men indeed met their wretched ends. It's a mystery, it's a battle with a bureaucracy, it is research at its humane best.
But through the whole book, the writing is what stands out and what holds it back. Maclean had to abandon the work before his own death, and I guess this is what the editors drew together to make a whole work that is not without its seams. The poetic turns of phrase jump back and forth, sometimes stumbling around making the reader/listener get lost in time and in space. I wonder if this stands out more here in this Unabridged version.
Still, it's a vivid account of a horrible day, a fine tribute to those who lost their lives, who might've been saved except for unfortunate split-second decisions, a poem about life and death, and a window into an old man's soul.
Not a perfect listen, but I enjoyed the many questions posed, lived, answered.

McLean’s prose is nearly vivid and descriptive enough to overcome it, but a key part of the book involves several photographs that McLean himself captured or acquired as he researched the book. One of the few times I have really wanted a supplement in an audiobook.

How Maclean is able to address scientific information, human emotion, and historical events all at the same time AND make it fascinating and inspiring is beyond my understanding! I loved how we are taught about these young smoke jumpers and an old man running out of time all at the same time. I highly recommend this book!

i thought the audio version was well done. the story is a great study in team composition and communication.

A masterpiece by Maclean

This is a book I will forever keep on my audible shelf! The prose and narrative was amazing! A great performance! It should be a mandatory read/listen for any student of natural resources and American Western history.

Stories we need to hear

I am at a loss of words for how the author achieved both an epic story-telling and a research of a neglected historical event.

The first half of the book is a great well told story. The second half is a bit of a ramble.