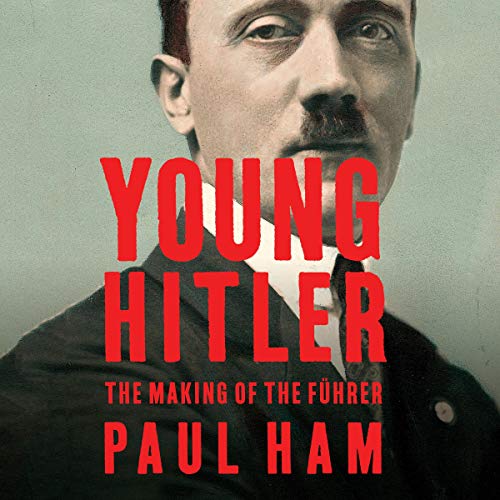 By: Paul Ham
Narrated by: James Anderson Foster
Try for $0.00

By looking deeply into the Führer's childhood, war experiences, and early political career, this rigorous narrative seeks to answer this question: How did the early, defining years of Hitler’s life affect his rise to power?

When Adolf Hitler went to war in 1914, he was just 25 years old. It was a time he would later call the “most stupendous experience of my life.”

That war ended with Hitler in a hospital bed, temporarily blinded by mustard gas. The world he eventually opened his newly healed eyes to was new and it was terrible: Germany had been defeated, the Kaiser had fled, and the army had been resolutely humbled.

Hitler never accepted these facts. Out of his fury rose a white-hot hatred, an unquenchable thirst for revenge against the “criminals” who had signed the armistice, the socialists he accused of stabbing the army in the back, and, most violently, the Jews - a direct threat to the master race of his imagination - on whose shoulders he would pile all of Germany’s woes.

By peeling back the layers of Hitler’s childhood, his war record, and his early political career, Paul Ham’s Young Hitler: The Making of the Führer seeks the man behind the myth. More broadly, Paul Ham seeks to answer the question: Was Hitler’s rise to power an extreme example of a recurring type of demagogue - a politician who will do and say anything to seize power; who thrives on chaos; and who personifies, in his words and in his actions, the darkest prejudices of humankind?

What listeners say about Young Hitler

This is an interesting look into the youth of a man who became one of the most evil leaders in modern history. Kept my attention throughout.