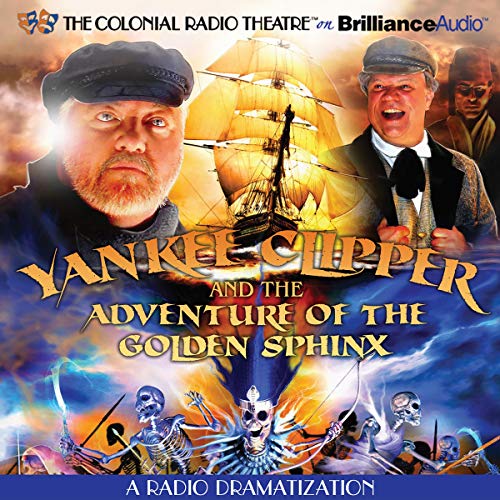 Yankee Clipper and the Adventure of the Golden Sphinx

Captain Martin Hawk and his crew arrive in Alexandria, Egypt, on the clipper ship Yankee Spirit. With their mysterious guide, Ini-Herit, they embark on a journey to the famed Valley of the Kings. There, Hawk encounters Professor Donald Curtis who has made an incredible discovery - the tomb of Prince Erihppas. Up until now he was believed to be only legend. Within the tomb the professor has found a large Sphinx, made entirely of solid gold. It becomes the task of Captain Hawk to transport the Sphinx to a museum in England. But it is soon stolen by Captain Penrose, of the rival ship Black Arrow, and the chase begins. Once on the high seas strange, horrible, and tragic events begin to occur. The mysterious guide Ini-Herit and the Sphinx are not what they seem. Packed with nail-biting suspense, action and adventure you will be hooked until the thrilling conclusion.

Another fine hit from Colonial Radio Theater with this one set in the year 1868 as the ship arrives in Alexandria to collect artifacts found by an archeologist as he found a tomb of an Egyptian Prince.

Rival Ship Black Arrow was hired to acquire a golden sphinx from the artifacts which was part of the collection as they were forced to steal it and the adventure begins.

From weather, to combat, to an island queen and finally EGYPTIAN SPIRITS swept the ship from the Atlantic to the Pacific. This wonderful cast kept a great story easy to follow and the music score is top notch.

I have always enjoyed Colonial Radio Theater products and I really hope you will give this one a listen and enjoy as much as I have.

It is a great voyage and exiting adventure with great detail for all to enjoy. I highly recommend this along with many other great titles from The Colonial Radio Theatre.

Couldn't turn it off!! Absolutely loved it! If you like historical adventures this is for you! We love Jerry Robbins & the Colonial Radio players!!! Keep making more!!!!!

What did you love best about Yankee Clipper and the Adventure of the Golden Sphinx?

The audio dramatically recreates the feel of sailing a ship in that era.

I felt that the ending was drawn out a trifle too long - too much to and fro between the hero and villain. It could certainly have been a couple of episodes shorter. It was also very male dominated - there was one female character, who went the very predictable way of most pulp female characters.

It was ok through the first parts but when ancient soldiers and princes come back to life? Write another powder river jerry 👍