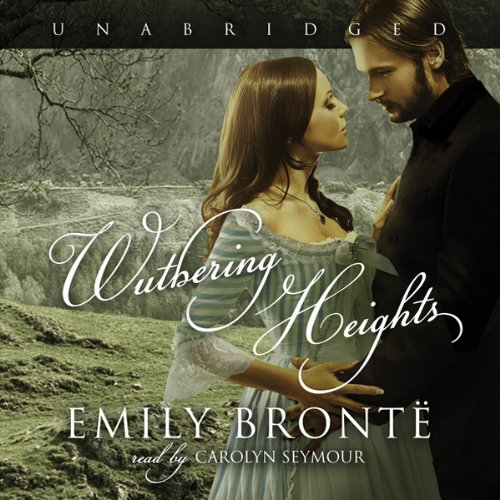 By: Emily Brontë
Narrated by: Carolyn Seymour
Try for $0.00

Wuthering Heights is the sole novel of Emily Brontë, who died a year after its publication at the age of 30. A tale of exceptional emotional and imaginative force, it is an arresting vision of metaphysical passion, in which nature and society, heaven and hell, and dynamic and passive forces are powerfully juxtaposed.

Wuthering Heights is the name of an old house, high up on the Yorkshire moors, occupied by the Earnshaw family. Events are set in motion by the arrival of Heathcliff, a child waif who has been living the life of a wild animal in the slums of Liverpool. Adopted by the kind Mr. Earnshaw, he is bullied and humiliated after Earnshaw’s death by the new master of the house, Hindley. But Heathcliff’s passionate and ferocious nature finds its completion in Earnshaw’s daughter, Catherine.

“There is something magnificent about the depth and intensity of their love….it is hard not to listen in awe when Catherine cries out, ‘I am Heathcliff! He's always, always in my mind; not as a pleasure, any more than I am always a pleasure to myself, but as my own being.’" (Erica Bauermeister, 500 Great Books by Women)
"It is as if Emily Brontë could tear up all that we know human beings by, and fill these unrecognizable transparencies with such a gust of life that they transcend reality." (Virginia Woolf)

it has been one of my favorite novels for many years. I never tire of reading it again.

I loved listening to this book that I read as a teenager, I got so much more out of it this time and the narrator was fabulous!

What an awful story!

I'd read this book as a teenage English Major and nostalgically thought it would be good to hear it again. Was I wrong! It is nuts!

None that I can easily think of - except to realize that the 'good old days' in England were pretty brutal - and that we've come a long way from the cruelty of family relations that Bronte writes about.

As wonderful as I remembered

I thoroughly enjoyed this reading of this beloved classic. The performance was exceptional! Loved it!

I'd just finished Jane Eyre and was inspired to read more by the Bronte sisters when I chose this book. And, like Jane Eyre, it takes place in lonely houses on the moors. But the tone and tenor of the tale is very different.
There are some very unpleasant characters in this book. They argue, harrass and harangue each other. These disagreeable exchanges dominated the book for me, and made it difficult to listen to at times. Overall, though, I am glad to have experienced this classic novel, which is a touchstone for many modern authors.

The narrator was for the most part very good. She gave different tones and inflections to each character and seemed to be consistent, although there were times when I lost track of some of the characters. And, even though I think I am able to understand more "rustic" British accents than many Americans, there was one servant character who was overall unintelligible to me.

I can see the appeal... but

So I gave this a listen because I felt like I needed to since all my favorite authors quote it. I can see the draw- powerful love story, but irritating as heck the whole way though. You really want to yell at them all and give up, but then every time you vow to not listen any more you think- but then heathclif would win! so I listened to the whole thing, and while I was glad I did- I still want to kick most of them in the teeth!

Very enjoyable, the narrator used different accents to express the differences of the characters. .I.was able to follow the story and get as engrossed as I do.when reading well-written novels. This was my first audio book, it will not be my last.