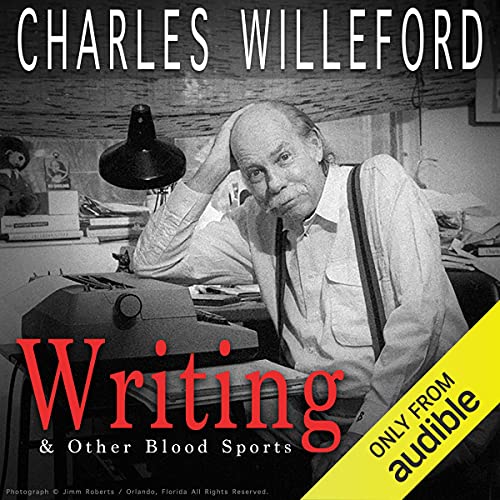 By: Charles Willeford
Narrated by: Fred Berman
Try for $0.00

Charles Willeford was a man of letters in all senses of the word. Poet, essayist, short story writer, novelist, and raconteur, his early paperback novels with their existential/immobilized heroes were the creations (to paraphrase Chandler) of a man not himself immobilized - a man who, instead, with his trademark black-humored prose, doggedly examined the mind-thrumming banalities of our materially sated but intellectually befuddled postwar world, crafting a body of work that is only now, 50-some years after his first appearance in print, beginning to be widely appreciated as a series of guidebooks on how to live in an absurd universe.

Writing & Other Blood Sports contains autobiographical essays, profiles of and opinions about fellow writers (“The Big White Smile” [1964] is the first critical article written on John D. MacDonald; in “Chester Himes and His Novels of Absurdity” he pays tribute to an immobilized and self-exiled writer’s dissections of humanity’s foibles; while “Jim Tully: Holistic Barbarian” makes the case for taking another look at the founder of the hard-boiled school - now forgotten because he didn’t write genre fiction), and commentaries on Willeford himself by both critics and friends. The collection culminates with the book-length study New Forms of Ugly: The Immobilized Hero in Modern Fiction, wherein Willeford follows the development of this “new hero” from Dostoyevsky’s Mole Man to Saul Bellow’s Moses Herzog.

Charles Willeford observed people and events without sentimentality but was always empathetic. He thought deeply about what we’re all doing (and not doing) here, and his insights and opinions are worth all our whiles to ponder.

What listeners say about Writing & Other Blood Sports

"... the immobilized hero lives alone, usually in a single room in a private home or a depersonalized hotel room. The immobilized man is usually a bachelor or a man who had been unable to adjust with any degree of success to a conjugal arrangement. So he lives alone by choice. The American immobilized man because of our affluence usually has better living conditions than his European counterpart although he shares the same desire for austerity. The immobilized man cannot, for any one of a dozen reasons, abide living with his immediate family or distant relatives ... the immobilized hero has a sense of self-satisfaction bordering on smugness in his isolation from relatives and friends. Although he is in a static condition, he is free to the extent that he’s the only person who knows the true nature of reality. Whether he is a successful artist or a failure as an artist when this is his vocation, avocation, or desired role, the fact that he fancies himself as an artist of some kind, sets him above and apart from his fellow men ..." from New Forms of Ugly: The Immobilized Hero in Modern Fiction (1964) by Charles Willeford

Listening to this in the Audible version of Willeford’s WRITING & OTHER BLOOD SPORTS, I loved the concept of the Immobilized Man in literature. This Audible version (a print or Kindle version seems to be unavailable) is a master class in writing.