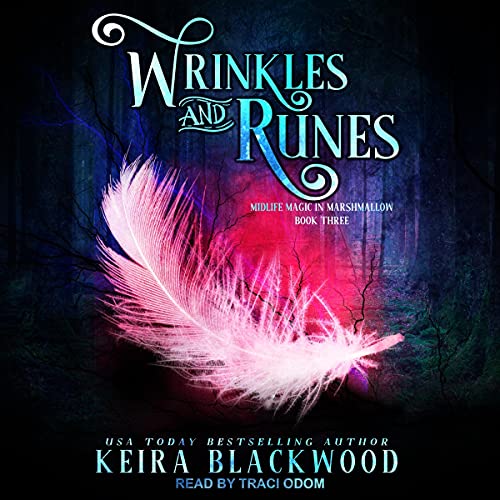 By: Keira Blackwood
Narrated by: Traci Odom
Try for $0.00

After a two-decade marriage ends with my husband's disappearance, I'm left to wonder: Did he run off with another woman? Or is he dead?

And which one is worse?

Before I can answer that, I turn into a chicken. A real one. The kind that fears KFC.

I want nothing to do with Marshmallow's magic community, but somehow, I keep getting pulled into its drama.

There are only two choices - keep hiding from the new reality of my life or embrace the weird, the magic, and the feathers.

It's taken 43 years for me to become the person I was always meant to be. Chicken shifter, witch, or whatever the new me is, I'm going to rock it. Anyone who doesn't like it can cluck off.

What listeners say about Wrinkles and Runes

Another great storyline in this series. I’m hoping for more of this series to come along soon. Keira Blackwood has an incredible mind to keep dreaming up these wonderful paranormal characters and locations. Traci Odom once again gave a stellar performance as she brought it all to life. I highly recommend this book/audiobook to paranormal fans suggesting to start with the first in this series.