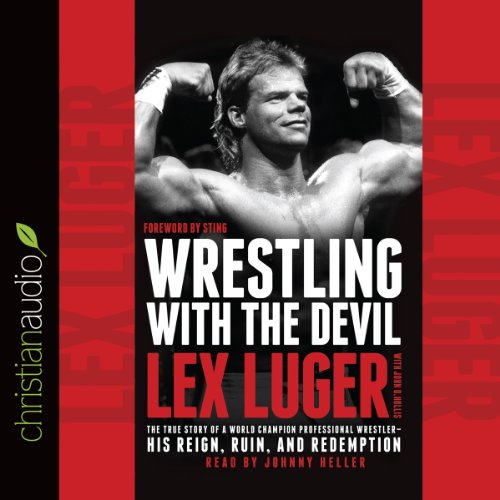 Wrestling with the Devil

Lex Luger, wrestling mega-sensation and three-time world heavyweight champion, ruled the ring for years as "The Total Package." Whether he was making a dramatic entrance from a helicopter, defeating champ Hulk Hogan, or sculpting a near-perfect physique, Lex was on top of his game. Yet backstage, he was wrestling with addictions to sex, drugs, and alcohol - things he clung to even when his mistress died suddenly of a drug overdose and Lex went to jail. There, Lex faced the truth: he was losing the fight for his life. And still awaiting him was his most brutal opponent yet, when the wrestling champ found himself helplessly paralyzed from the neck down. In Wrestling with the Devil, Lex Luger reveals never-before-told stories from his career, his struggle with personal demons, and how, through unexpected faith, grace, and redemption, he overcame all odds to fight the only battle that really matters.

What listeners say about Wrestling with the Devil

I really enjoyed this book. the story is good and inspiring. the narrator may or may not have alot of knowledge about wrestling. but he did a good job. there were no mispronounced names of wrestlers. he clearly did his homework before performing this reading.

Easy read could have been more in depth regarding wrestling business

Was 100% not a fan until this book. I'm not even sure why I got it. But I'm glad I did. If your considering getting it, I'd say GIVE IT A TRY.... You will not be disappointed.

loved it. Could not stop listening. Very motivating, inspiring,interesting and keeping hope. Never giving up. staying positive through god. making you realize things can always change with God's help.

Lex was my hero as a child, but even more now

I've always related with Lex Luger and he influenced me in many ways to become the person I am today. I've made many mistakes along the way and am having troubles forgiving myself to this day. His story of redemption gives me hope and motivates me to restructure my life priorities. Thank you Lex.

Biggest Surprise In A Long Time

I got this book primarily for behind-the-scenes wrestling stories and I got a little of that, but what it really has to offer is a story about the hollowness of what our culture calls success contrasted with the rich meaning and purpose that is there for us all to uncover. I will probably keep a copy of this for the rest of my life.

Was easy to listen to and enjoyed the progression of the book. I would recommend.

great story and read. surprused at some of the reviews saying this is a prodomently religious book. as a believer, i enjoyed and appreciated his life change, but certainly this is Lex's life on how he got in the ring and how he got out. great story and book

This book is one of the most dynamic examples of redemption I have ever read. Pure honesty openness and raw examination of oneself cannot be denied. This is a book that could possibly change your life!

Luger plays Victim too much

The book seemed rush. Certain time frames especially his WWF run is too basic. Its obvious that Luger wasn't over with the fans so he didn't germt a run with the WWF title. Also you can tell he was a duece bag. He lacks accountability especially all the times hrle violated his probation. He acts like it wasn't his fault.

While I would have like the book to have been a bit long and to have concentrated on his career, this is a surprisingly brutal honest tale of a flawed man.

The story has to be told as a lesson to many, that after living a life of sin you can have redeption.

from a man who only loved himself to a man who found and loved god.

Lex would not be here right now if not for finding his faith and turning his life around.

great story from a wrestling legend.

What a great story. His 3on him for finding his salvation. Good read. Well worth a listen