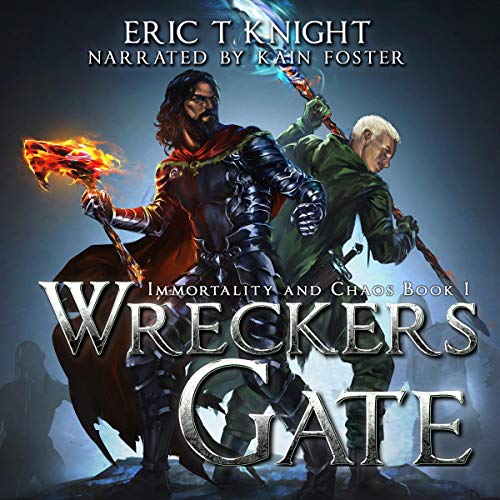 “A fascinating plot, unforgettable characters, and a vast world...if you like Game of Thrones or Lord of the Rings, you will love this novel.” (We Said It Literary Reviews)

The prison cracks. What emerges is something no one expected...

Wulf Rome clawed his way up from the gutter to become a general in the Qarathian army. But when he rebels against the king's mad plan for another senseless war, he is exiled to the frontier and sent on a suicide mission into the depths of a merciless desert.

But Wulf Rome is a hard man to kill. Instead of dying, he survives, and in an underground cavern he finds...something.

A vast, ancient wall with an unusual axe embedded in it. The axe gives him the power to topple the king and take the crown, but removing it cracks a prison built eons ago by the gods to contain Melekath and his Children.

Now Melekath's chief lieutenants, the dread Guardians, are free, spreading death and chaos across the land. Soon the prison will crumble completely and the land will be overrun. The future looks bleak.

Until a mysterious stranger appears. Claiming to be a god, he says he is humanity's only hope.

But the weapons he offers are dangerous and uncontrollable and Wulf Rome soon begins to suspect his motives.

As events escalate, Wulf Rome comes to see that the war is far more complex than it appears. The enemy is not who he thought it was and his allies have their own purposes that care nothing for the fate of humanity. On top of it all, there is another, larger danger, an enemy that even the gods cannot face.

Will Wulf Rome be able to navigate the treacherous paths to survival, or will life itself be devoured?

Grab your copy and start this unique adventure today! And be sure to check out the sequel series, Chaos and Immortality, as well as the upcoming Dragon Queen of Chaos.

What listeners say about Wreckers Gate

Not a fan of the narration

I purchased the Immortality & Chaos series after reading these books on KindleUnlimited. Loved the characters, especially Quyloch. I purchased 3 Audible credits today for $39.56 and used one credit to purchase Wrecker's Gate. If you are a Simon Vance fan (narration), then you will like the narration here. Otherwise, search elsewhere for an enjoyable "listen-while-you-work" audio book. I'm unable to listen beyond Chapter 7.

it was difficult and was read badly..no stars for it..no recommedation..very tough to get thru..