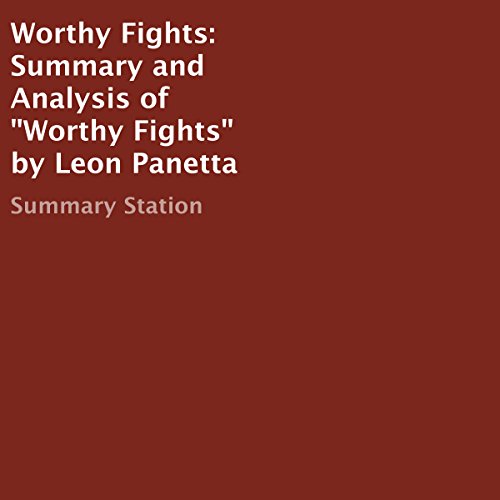 By: Summary Station
Narrated by: Lynn Longseth
Try for $0.00

Oftentimes, society fails to realize the struggles behind closed doors that occur within the boundaries of government. Society fails to see the fights of those who refuse the political ploys of a government position to uphold democracy and ensure the law is upheld. Bill introductions, scandals, resistance, and party politics often stymie within the quagmire of political reform.

This was the fight Leon Panetta notes in his memoir titled Worthy Fights: A Memoir of Leadership in War and Peace with Jim Newton published by Penguin Press. Many believe this book is strictly about the Obama Administration's mistakes or successes in security and foreign policy. It is so much more than that. This book is about the transformation of a man who has lived through one of the most productive eras in the history of the United States as political parties transformed within themselves. From meager beginnings as a child of Italian immigrants to a valiant political soldier in the Civil Rights era to accepting his appointment as the director of the CIA in the Obama Administration, Panetta fought against terrorists to protect the freedoms this country holds dear.

Leon Panetta paints a portrait from his perspective as he employed traits he inherited from his Italian-born father and grandfather about his life as a first generation American-born citizen muscling his way through law school. You will also learn about the ROTC during his college years, his military service, and subsequently governmental politics. In his book, Leon Panetta describes and depicts many important points that shaped his future in the world of politics as he had a direct and indirect hand in many of the policies society now takes for granted.

What listeners say about Worthy Fights: Summary and Analysis of "Worthy Fights" by Leon Panetta

It summed up key points of the book that I felt Leon specifically identified for this analysis. I didn't enjoy the readers voice. Sorry about that.