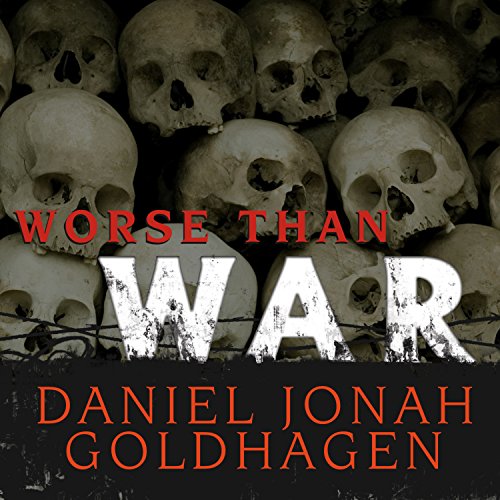 By: Daniel Jonah Goldhagen
Narrated by: Patrick Lawlor
Try for $0.00

Daniel Jonah Goldhagen's books are events. They stir passionate public debate among political and civic leaders, scholars, and the general public, because they compel people to rethink the most powerful conventional wisdoms and stubborn moral problems of the day.

Worse Than War gets to the heart of the phenomenon of genocide, which has caused more deaths in the modern world than military conflict. In doing so, it challenges our fundamental beliefs about human beings, society, and politics.

Drawing on extensive field work and research from around the world, Goldhagen explores the anatomy of genocide - explaining why genocides begin, are sustained, and end; why societies support them; why they happen so frequently; and how the international community can successfully stop them, as well as why it should. Worse Than War seeks to change the way we think and to offer new possibilities for a better world. It tells us how we might at last begin to eradicate this greatest scourge of humankind.

"Grisly specifics share space with an insightful, often startling analysis of why mass murder occurs and how to stop it.... A significant achievement." ( Kirkus Reviews)

What listeners say about Worse Than War

This Book Will Cause You To Expand Your Thinking

This book started out with “a bang” as it came at you with one hard hitting fact after another, and the author has a great way of delivering his story.

It got a little overly long (3 sections on an audio book!) and slowed down a little bit, but overall, it was very good.

Hopefully, one day we humans will learn our lessons and learn to live together in peace and harmony… but wait, hmmm… 7 billion people already on a planet that is shrinking and resources are becoming less and less, and more and more valuable to the “have nots”.

Oh well…. Good luck to us all!

A solid analysis of historical genocides, but...

I must first confess that at the time of this writing, I am only around 17 hours into Worse Than War. However, I feel compelled to write this review due to several irksome tendencies that Mr. Goldhagen has in his writing.

Before I get into my criticisms, allow me to state that Mr. Goldhagen has done a magnificent job in compiling and considering various genocides throughout history. Though he leaves out eliminations prior to the 20th century, he is comprehensive in his coverage of genocides in the 20th and 21st centuries. For example, he does not cover the genocides of indigenous peoples across North and South America since the arrival of Europeans.

That said, my largest complaint would have to be his biased and inaccurate portrayals of Islam and Muslims, as well as communism and communists.

Aside from covering the Turkish persecution and genocide of the Armenians, his primary coverage of Islam pertains to "Political Islam". By which he actually means a wide variety of extremist movements, each with distinct motives, primarily within the Middle East. He tends to cluster extremist Sunni, Shia, Wahhabi, etc together as a single menace with a single goal (which is blatantly false).

He plays up the discredited notion that Al Qaeda hates the West for its freedoms and beliefs, ignoring their objectives for transforming the Middle East and takfiri tendencies. I would recommend The Longest War, The Accidental Guerilla, and Destiny Disrupted for a superior analysis of Al Qaeda's motives and actions.

Additionally, he ignores Western and Jewish culpability with regards to the present situation involving Israel and Palestine. He presents a tremendously complicated situation as having a clear villain, Hamas and the Palestinian Authority, and a clear victim, Israel. He does not appropriately entertain or consider the legitimate grievances that Palestinians have regarding the creation of Israel and actions taken by Israelis since then.

Similarly, he consistently blames the communism for the actions taken by Mao and Stalin, both of whom used the idea of communism to further their own power and wealth, without being particularly good communists. He never enters into a discussion of the beliefs of communism, but rather treats it as an existential evil. I personally would have expected better, and less biased, analysis from one as well educated as Mr. Goldhagen.

On a less significant note, his writing is also flawed. It tends to be repetitive, primarily to drive home the names of the leaders of past genocides. Additionally, he repeats many of the same points and ideas throughout the book. Even repeating the examples he presents in earlier discussions on those points and ideas. However, this repetitiveness is largely unnecessary and makes the book more of a chore to read than it otherwise might be.

That said, I would recommend the book as part of a comprehensive study of genocide. I would not recommend that this be your sole or primary source as it too often reflects the beliefs of the author, rather than objective fact.