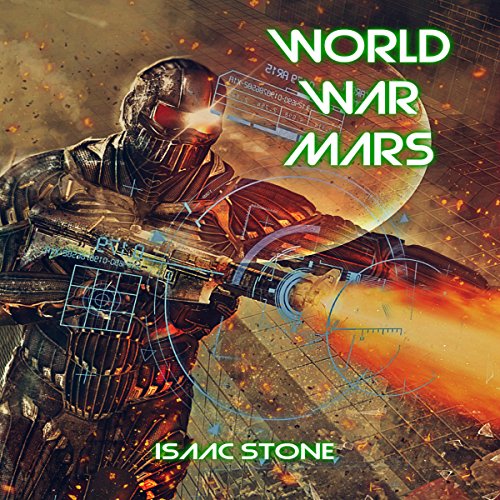 The planet Mars has become an epic battleground where mighty armies clash in a seemingly endless struggle. Pride, politics, and greed have ignited the spark of war, drawing a vast web of alliances into a bitter conflict. Artillery fire and dropships fill the skies while combat marines endure the savage grind of futuristic trench warfare.

The propaganda media machine has painted the conflict as one in which fortune and glory await the daring. Young men everywhere flock to the various banners, unprepared for the grim reality of war on the distant planet. Harlo, one such young man, never wanted to be a deep sea diver, and decides that signing up to be a contract soldier is a better alternative to life as a low-wage algae scraper.

Mars is blood red for a reason.


The story was confusing in many levels. Since this is a free copy I tried to finish listening so I can post a review.
I received a review copy via AudioBookBoom.

Enjoyed this short book.
&quot;I was given this free review copy audiobook at my request and have voluntarily left this review.&quot;

Confusing and somewhat ridiculous. Absolutely no character building was done, combine that with a hard to follow plot I'm just glad it was so short so I didn't have to suffer through more. The only bright point was the narrator. She did an amazing job.

A tale of the future when the world has unified Into only a few major factions and they have now taken to the stars and they do battle in a standard conventional ground war to prevent nuclear holocausts across the worlds. The various factions are locked into their specialization unless they are volunteering for the war class. This story of a deep sea diver trying to escape being killed by a kraken by going to war. Great battle scenes. Well developed world and the last five minutes of the story are amongst the best. Great story and great narration. Highly recommend. I was voluntarily provided this free review copy audiobook by the author, narrator, or publisher.

What was most disappointing about Isaac Stone’s story?

The story was just bad on so many levels. I'm sorry Isaac, but everything from the premise (Earth using Mars as a coliseum complete with flaming swords) to character development (was none) to plot (rather fight giant squid then war on Mars) left me shaking my head.

Which character – as performed by Persephone Rose – was your favorite?

Persephone Rose Was a great reader/narrator he changed voice, pitch, inflection and what not to help distinguish the different characters. His clear voice and pronunciation made the difference between finishing this story and quitting after 10 minutes.

“I received a free copy of this audiobook from the narrator and chose to review it.”

**I was given this audio book for free from Audiobook Boom and the narrator for a honest review.**

The planet Mars has become an epic battleground where mighty armies clash in a seemingly endless struggle. Pride, politics, and greed have ignited the spark of war, drawing a vast web of alliances into a bitter conflict. Artillery fire and drop ships fill the skies while combat marines endure the savage grind of futuristic trench warfare.
The propaganda media machine has painted the conflict as one in which fortune and glory await the daring. Young men everywhere flock to the various banners, unprepared for the grim reality of war on the distant planet. Harlo, one such young man, never wanted to be a deep sea diver, and decides that signing up to be a contract soldier is a better alternative to life as a low-wage algae scraper.
Mars is blood red for a reason.

In Isaac Stone's World War Mars, Mars has been terra formed centuries ago and humans have colonized other planets as well. With new colonization, came the World War on Mars, everyone battling over different things. In this futuristic universe, Stone has divided the human race into super powers and within these super powers there were colonies. Within the colonies there are syndicates. Each syndicate has a specific job or skill set and stay within their syndicate. You are born into your syndicate. They only way out is for you to have funds to start your own. These syndicates are similar to The Hunger Games districts or Divergent's factions. Harlo, wants more than what his syndicate is offering him, so he decides to go to war. Stone's universe is rich in detail, not only in the planets surrounds and way of life, but in war time strategy and PTSD. You really understand the horror of war and the narrator, Persephone Rose does an outstanding job bringing true emotion and a unique twist. Instead of just reading Stone's novel, Rose delivers unique character traits and performances that make you feel for the characters and experience their wartime insanity. If you have never listened to Persephone Rose as a narrator before, then you are in for a treat.

The combination of Isaac Stone's words and Persephone Rose's voice bring you a novel that you should add to your library today! If you enjoyed The Hunger Games's districts, Divergent's factions and choices, Ender's Game's wartime training in space and The Martian's learning to survive on Mar's harsh environment, then you get all four rolled into World War Mars.

Would you try another book from Isaac Stone and/or Persephone Rose?

This is the first book from Isaac Stone that I read and I found it to be very boring and confusing. So, I won't be eager to try any other book from him, unless it has good reviews from others of course.

Persephone Rose on the other hand did an awesome job of narrating the story. All the different characters were voiced brilliantly. So, I would definitely checkout some other books narrated by Rose.

Has World War Mars turned you off from other books in this genre?

No. I love Sci-fi genre and one book isn't going to turn me off from other books in the genre.

I voluntarily received this copy for free from the author / narrator / publisher and am leaving an unbiased review.

The story is very confusing and incomprehensible. There are confusing books that get better after few chapters and explain everything later. Sadly this book wasn't one of them. The plot kept getting more n more confusing and lost my interest. And there was no character development at all. The motivation of the characters sounded flawed at best. If it weren't for the good narration job by Rose, I would've quit it quite early.

"The savage beasts of prey."

After hundreds of years of peace, the savagery of war had been forgotten until an assassination of the ex president of one of the three power blocks on Mars restarts hostilities. Fighting is intense, new recruits are needed so the offer of a three month enlistment for a large sum of money is made. On earth, Harlow Tarkis, citizen of Olympia, is tempted. Everyone is born into a syndicate, following the family occupation. He is a diver, harvesting food from the ocean, almost qualified. Then,his diving buddy Nea is killed by a believed mythical Kraken and Harlow enlists to escape the terror of the sea.
To go to a greater terror on Mars.

This quirky story has it's faults: the package from Earth Prime at the beginning, for example, is used to provide an historical background explanation but really was unnecessary. But the vision of a futuristic Earth and colonies was interesting, with the political and social divisions lightly touched upon but easily sufficient to provide thoughtful ideas. Although not written in the first person, the action is seen almost entirely from Harlow's point of view and, as main protagonist, his is the only one to be given a full characterisation. But it is enough for the purposes of this story - the tale of his thoughts and experiences as a pawn on the battlefield of war. Some nice touches, too, as this futuristic battleground is more reminiscent of World War 11 and the Great War (our non fictional past) than of the fabulously imagined science fiction weapons more usually depicted.

The narration by Persephone Rose was, like the story itself, good and just a little bit quirky. His voice is clear and strong, warm and quite deep, but with slightly odd intonations at times which seemed to fit with the nature of the book, almost observational. In dialogue, too, the voices given to each character were distinctive and, sometimes, unexpected. Overall, a good performance.

I very much enjoyed this unusual take on the fate of a foot soldier in the future as well as the glimpse of the society he inhabits and I would like to thank the rights holder who freely gifted me a copy of World War Mars, at my request, via Audiobook Boom.Science fiction fans who are looking for military fiction with a difference will not be disappointed.

World War Mars is a fast paced and enjoyable

Where does World War Mars rank among all the audiobooks you’ve listened to so far?

World War Mars is a fast paced and enjoyable Sci-Fi war story with an interesting political background where earth has been split into 3 superpowers fighting over Mars. Whilst very enjoyable I would have liked a little more character interaction as you only got to know the main character and I can’t help but feel that more could have been made of the training to aid with this. The action was gripping giving an image of a futuristic World War 1 with trench warfare, artillery bombardments and hand to hand combat, yet it did not explore any of the emotions the characters were feeling during action scenes which is a shame.
The narrator did a good job, each character’s voice was distinctive enough to know who was speaking without any sounding odd.
Please note that I was given this free review copy audiobook at my request and have voluntarily left this unbiased review.