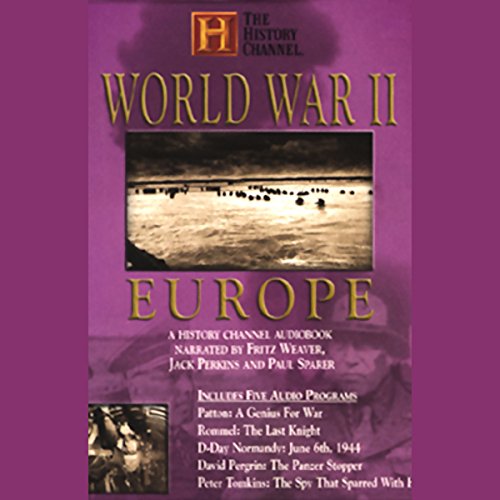 By: The History Channel
Narrated by: Fritz Weaver,Jack Perkins,Paul Sparer
Try for $0.00

Relive history as the men who experienced the most intense battles of World War II share their stories. The WWII Battle Classsics, produced as major TV specials by Lou Reda Productions, have been brilliantly adapted for this thirilling audio presentation. This is essential history, told by the eyewitness heroes who were there. World War II: Europe features full orchestration and the clamor of desperate battle.

Patton: A Genius For War
While the names of great WWII commanders have faded into the history books, the name "Patton" rings out with resounding force. It evokes a profane, go-for-the throat, hell-on-wheels commander whose armored columns dismembered Hitler's "thousand-year-Reich" with matchless thunder and dash.

Rommel: The Last Knight
He served the cruelest monster who ever lived, yet emerged with his reputation shining. His military brilliance inflicted crushing defeats upon French, English, and American generals, who nonetheless regarded him with awe and respect. His men loved him. His enemies feared him. No one forgot him.

D-Day Normandy: June 6th, 1944
The story of how close to disaster the D-Day invasion came has never been fully told. Listen to those who shared in Normandy's longest day.

David Pergrin: The Panzer Stopper
The legendary heroes of the Battle of the Bulge got all the glory. It was a tiny band of unsung heroes that saved the battle, perhaps the outcome of the war, for the Allies. This is the story of David Pergrin and the kid engineers who slammed the door in Hitler's face.

Peter Tomkins: The Spy That Sparred With Hitler
Peter Tompkins, a 23-year-old American spy in Nazi-oppressed Italy, operated far behind enemy lines wth a price on his head. On his own, without help or refuge, he led Italian partisans in a devastating campaign of espionage and sabotage against the occupying Nazis.

Great stories and narration will keep you fastened to your seat.
Listened to many WW2 and WW1 audiobooks, and this one is
one of the best........