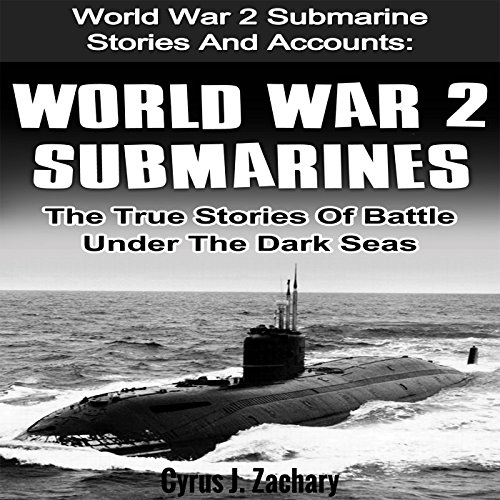 World War 2 Submarines: The True Stories of Battle Under the Dark Seas

By: Cyrus J. Zachary
Narrated by: Joseph Tabler
Try for $0.00

Human ingenuity has ensured that over the centuries, we have progressed enough to walk on the very moon. Submarine technology, then, comes as no surprise to us. The use of subs during the wars certainly turned the tide of the battle; the Allied Powers would no doubt have lost had they not engaged in naval battles of such grandeur.

As we saw, the War was brutal and horrifying; the submarines gathered intelligence and dealt powerful blows to their enemies, who were no less the stronger. If not for their work, the world would be a very different place today, with the probability of the Axis Powers winning instead.

In the end, these subs saved many a life. Their roles in the war are downplayed - for good reason. Intelligence gathering using technology is a tricky business; it is no wonder that the Allies themselves chose to keep these stories under wraps.

What we do know is that these submarines took on the might of the most advanced technology in the world and came out victors.

Here is a Preview of What You'll Learn...

What listeners say about World War 2 Submarines: The True Stories of Battle Under the Dark Seas

Nice overview of several different submarine’s accomplishments during the war

This book gives a nice overview of several subs and their respective accomplishments during the war. It’s not long, so do not expect any in depth coverage, but it does manage to include everything pertinent as well as a few interesting tidbits about each. If you’re interested in subs and do not want to listen to an entire book about just one submarine I would suggest this. The reader also did a good job. I was provided a free copy of this book in exchange for an honest review.

picked up many items from history from it. a less know part of WW II history.
i got a free copy of this book

Great overview provides a window into a portion of the war

While this is a short listen it provides a broad overview of many navel actions of submarines in ww2. This is one that I went back though and took some notes on because there are numerous, actions, vessels and events that I wished to learn more about. Very much a portal book. I was voluntarily provided this free review copy audiobook by the author, narrator or publisher

A short history that will wet your appetite.

A concise history of submarines in world war two.
Very interesting and definitely wetted my appetite for more information on this subject.
I wasn't convinced by the narration. A little rushed in my opinion.
Not enough to spoil my enjoyment of the audio book.
I received a free copy of this audio book at my request and voluntarily leave this honest review.

I guess this would be OK for a dry factual book

The problem with this book is it reads with very little passion. This includes the reader. I got this book for a road trip for an 11 and 12 year old boys who love to talk about ww2. In the end, we turned this book off because it was boring.