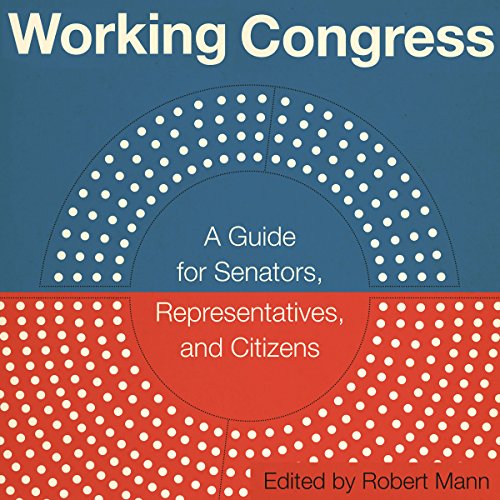 By: Robert Mann
Narrated by: Jim Seybert
Try for $0.00

In 1964, as the polarizing Civil Rights Act made its way through the House and Senate, and Congress navigated one of the most tumultuous eras in American history, a Harris Poll put the institution's approval rating at 60%. Why then, 50 years later, has the public's approval of Congress eroded to an all-time low of 10%? Working Congress: A Guide for Senators, Representatives, and Citizens seeks to isolate the reasons for Congress's staggering decline in public opinion, and to propose remedies to reverse the grave dysfunction in America's most important political institution.

Aided by the input of retired members of Congress from both major parties, editor Robert Mann and his fellow contributors identify paralyzing partisan rancor as perhaps the most significant reason for the American public's declining support of its main representative body. The lack of mutual trust within Congress reflects (and creates) the suspicion and animosity of the great majority of Americans. Working Congress argues that members of Congress must find a path to cooperation if they are to function as the representative institution the founders intended.

Trenchant chapters by Mickey Edwards, Ross K. Baker, Frances E. Lee, Brian L. Fife, Susan Herbst, and Mark Kennedy analyze the problems and challenges facing Congress and suggest solutions to counteract partisan gridlock. Though these scholars and former members share a conviction that men and women of good will can and should work together, they do not assume that their solutions will herald a bipartisan utopia. Instead, they recognize that Congress is, and will always be, a work in progress.

What listeners say about Working Congress

"Working Congress" brings together several retired Congressmen to look at how the current congress works, or doesn't work. In a series of essays (the individual retirees don't interact with each others writing) the ex-Congressmen point out flaws in how things are currently done, and make suggestions on how they could be fixed.

Things discussed include gerrymandering of districts, the lack of familiarity between Congressmen of different parties (the viewing them as 'enemy'), non-representative districts, the lack of middle ground as parties move to the extremes, the lack of compromise and discussion replaced the reliance on a sound bite, the work towards defeating the other party rather than governing, and the continual focus on the next election cycle. Each of these (and others) are discussed, often with examples, quotes and research data to back up the claims, before providing possible solutions.

Some solutions are much more plausible than others, but even if the solutions are not likely to happen (in some cases the horse has bolted and we will never get it back) having the discussion about the issues and the solutions is important. This book creates some great points of discussion.

Narration by Jim Seybert is good and what I would hope for from a non-fiction book. He is clear and well paced, occasionally changing the flow to provide emphasis where the text requires it. He manages to convey the message and the feeling of the written word very well.

This audiobook is at once relevant, timely, thought-provoking and important. The author starts by describing the vital role that Congress plays in keeping the U.S. political system functioning properly (i.e. by creating laws). The author shows why modern-day Congress is having such difficulty getting things done, explaining in detail the legislative steps that have led to today's congressional gridlock. Each subsequent chapter provides the listener with a series of suggestions on what can be done to get Congress back on track.

This book is refreshingly non-partisan, providing input and offering suggestions from both Republicans and Democrats. I LOVED how well the author shows us that today's problems in Congress have almost NOTHING to do with the individuals in Congress- or their political affiliations- and nearly EVERYTHING to do with the structural and procedural weaknesses in the Congressional system. This helps the listener to understand why Congress has become so partisan and why it's so difficult to get anything done in Congress. We have created a system that is perfectly designed for giving us what we're currently getting: nearly nothing. If the People want different congressional outcomes, the People will need to change the congressional system! This audiobook offers listeners-and Congress-a roadmap for changing the system with which Congress operates.

The narration of this audiobook is good; the narrator speaks clearly and has a pleasant voice.

There are numerous reasons why I enjoyed this book and would recommend it to others. First, I appreciate that it was written with contributions from both Republicans and Democrats who offered shared points of view as well as different perspectives. This book represents what I would hope to see in functional government - people with different political perspectives contributing different ideas and identifying common ground between the perspectives. Second, this book identifies a variety of structural and procedural weaknesses in the Congressional system, which help explain hyper-partisanship and the continuation of the status quo (the book was copyrighted in 2014). In other words, there are a variety of factors that contribute to the organizational culture of Congress; a simple fix isn't easy to identify. Third, I was delighted to read about the importance of rhetoric, argumentation, and persuasion. I'm suffering from partisan propaganda fatigue, so whenever I encounter objective or bi-partisan political discourse I feel refreshed and optimistic. Finally, I appreciated the reminder that politics can be as rude and violent as WWE wrestling. I recall one of the early chapters of Shelby Foote's first volume on the civil war, where he describes how a Senator (Sumner?) was brutally attacked with a cane by a fellow politician (Brooks?) on the Senate floor prior to the Civil War. I read more recently (in the magazine called 'Canada's History') that one of the reasons why Canadian women were not allowed to vote was because of the violence and drunken chaos that often occurred during the voting process. The history of decorum in politics is vastly interesting and it's helpful to be reminded that, although things could be better, things could definitely be worse!

I encourage anyone who wants a good distraction from the sensationalism of current political events to read this book. It's a relatively short audiobook, but I suggest that you listen to it one chapter at a time in multiple sittings rather than all at once.

As with most of the other non-fiction audiobooks that I've enjoyed in the past, I regret that I don't have access to references and source material, in case I wanted to explore these topics further.

The narration is excellent, no complaints whatsoever!

I provided my opinion in exchange for a complimentary copy of the audiobook from the author, narrator, or publisher.

should be required reading if running for office!

This is a well researched and reasonably accessible book that describes the history and current working conditions of Congress. While academic in prose, there is a lot of good information and useful recommendations that could have positive impact on our nation if implemented. The narrator, Jim Seybert, does a great job of making a somewhat complicated text easy to understand.

I received a free copy of this audiobook at my request and have voluntarily left this review.

I thought that this book was extremely interesting. As an non-US person, it was quite a good way of understanding Congress. It came across as the US's version of the House of Commons, and I found that rather interesting. The author also separated his own views, which I particularly liked. Oftentimes, it can be difficult to figure out fact and opinion in these types of books, but Robert Mann was brilliant. It really was a very good guide to Congress, and I've come out of this audiobook enlightened.