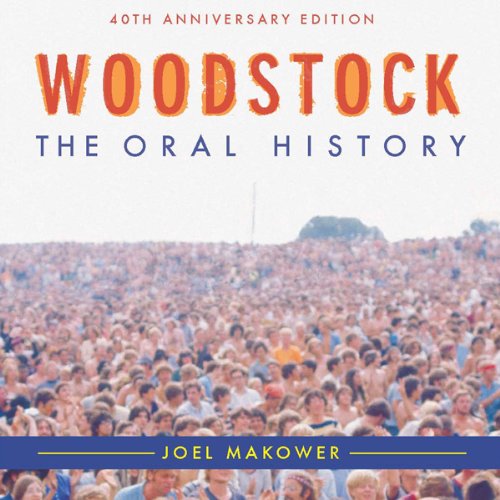 Woodstock: The Oral History is the definitive, electrifying account of the rock festival that shook the world and defined a generation.

In 1969 four young men - two budding entrepreneurs who really wanted to write sitcoms, a former head shop proprietor turned rock band manager, and a record company executive who smoked hash in his office - had a dream: to produce the greatest rock concert ever held. Little did they know how enormous a reality their dream would become - and what overwhelming hurdles they'd have to overcome, from crazed radicals to spoiled rockers to Governor Rockefeller.

Woodstock: The Oral History is the fascinating story of how it all came together - and almost fell apart - told by the men and women who made it happen.

It shares the adventures of a ragtag bunch of businessmen and bohemians, of hippies, hucksters, handymen, and hangers-on, working against all odds to unite a generation for one wild, glorious weekend in August 1969.

You'll hear the voices and get behind-the-scenes stories from such people as Abbie Hoffman; Miriam Yasgur (who, along with her husband, Max, owned the land on which the festival was held); Joe Cocker; Richie Havens; Wavy Gravy; Chip Monck; and dozens of other producers, performers, and key players in this rich tale of 1960s music, culture, politics, and hip capitalism.

"Woodstock comes alive here, even if the music itself seems almost incidental to the backstage dramas." ( Publishers Weekly)
"The definitive study of the mega-concert." ( Rolling Stone)

What listeners say about Woodstock

Wish I was there. Book is short and to the point. I like the real voice interviews of the story trippers.