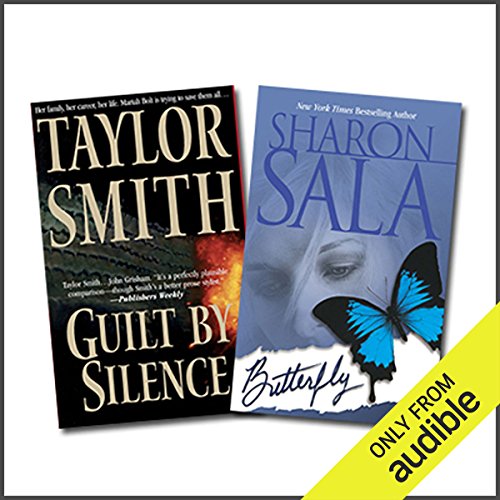 Two stories of suspense about women whose lives and families are on the line. The bad guys may be after them, but these resourceful women are more than up to the challenge of defeating the villains...and conquering the good guy's heart.

Butterfly by Sharon Sala: China Brown is alive, but barely. She doesn't want to live. She's lost the only thing that ever mattered: her unborn baby. Drawn to this lovely, fragile woman, cop Ben English must convince her to help him find a murderer in a scandalous case where the suspects reach into the upper echelons of Dallas society, politics, and the media. And as a killer closes in, China must place her trust in one man, because her life, and her heart, depend on it.

Guilt by Silence by Taylor Smith: Confronted by the devastating destruction of her family and too many unanswered questions, CIA officer Mariah Bolt is determined to prove that neither was an accident. As she probes deeper into what really happened in Vienna, she realizes that she can trust no one, not the government, not her mentor, not even her husband. Because now Mariah is the target.

Butterfly ©2000 Sharon Sala
Guilt by Silence ©1995 Taylor Smith
All rights reserved including the right of reproduction in whole or in part in any form. This edition is published by arrangement with Harlequin Books S.A. All characters in this book are fictitious. Any resemblance to actual persons, living or dead, is purely coincidental.

On Guilt by Silence:
"Taylor Smith...John Grisham. It's a perfectly plausible comparison, though Smith's a better prose stylist." (Publishers Weekly)

What listeners say about Women in Jeopardy